I missed yesterday's, so I'll make it up tomorrow.
However, here is the real Christmas Day gem.
Here's Hall and Oates' video and rendition of "Jingle Bell Rock."
It's absurd like every Hall and Oates video, but just to the next level. I love John Oates green sweater, it'd look good with some leather pants.
Also, here's a clip of Beavis and Butt-Head making fun of the video. Geraldo, hehe.
Posted by BulldawgJosh at 6:46 PM 2 comments:

No one says it better than Charlie Brown

I feel like spreading Christmas joy everyday, so I'm going to do videos through Christmas Day (and the one of Christmas Day is fabulous).
There's nothing that will top Run-D.M.C.'s "Christmas In Hollis," but this lame ski resort Christmas video is retarded enough to be entertaining.
Plus it is by Wham!, although there's not any short-shorts worn by men in the video (likely a relief to you all).
Here is "Last Christmas" by Wham!
Posted by BulldawgJosh at 12:30 PM 6 comments:

Since the creation of YouTube in 2006, fans have used the video sharing website to display songs and music videos concerning their favorite teams. 2010 saw an insane number of bad music videos appear on the internet. And while Georgia may have had one of the worst videos of the year, "Party in the UGA" was made by orientation leaders and was not just about the football team. Here's a look at some of the worst college football team music videos made over the last year.

Nebraska - "We Got T Magic"

Nebraska freshman quarterback Taylor Martinez got off to a fantastic start for the Cornhuskers this fall. The team was undefeated until Martinez suffered an injury and the 'Huskers lost to Texas. Later in the season, fans questioned his heart after a verbal battle with Coach Bo Pelini, but early in the season, they were simply calling him "T Magic":

White girl rapping about the Alabama football team, "Saying we want this
Posted by Streit at 12:36 PM 3 comments:

This is part two of our look at Georgia's history in the Liberty Bowl. 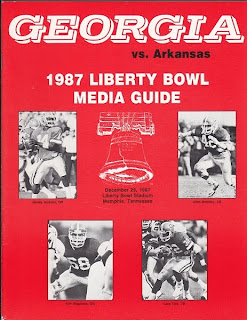 (Picture Courtesy of DawgToons)
Before Arkansas joined the SEC in 1992, Georgia and Arkansas had only met three times. Each of those contests took place in bowl game. The first two meetings went the way of the Razorbacks, defeating Georgia 16-2 in the 1969 Sugar Bowl and 31-10 in the 1976 Cotton Bowl. The two teams would meet again in Memphis in 1987, one of the last few times they would meet as non-conference opponents.
Georgia entered the 1987 Liberty Bowl with a record of 8-3. Lars Tate and Rodney Hampton were the stars for the Dawgs on offense, but this team was better known for its stars on defense. Georgia greats John Brantley, Richard Tardits, and Bill Goldberg led the team to give up no more than 27 points in any game all season. Georgia had lost 3 games by a combined 20 points, including a 1 point loss to #8 Clemson and a 3 point loss to #7 LSU. All three losses were to ranked teams, leaving the Dawgs with a 1-3 record against ranked opponents for the season.
Arkansas had a similar season to Georgia that fall. They were 9-3 (they played a 12th game against Hawaii in December), with two of their three losses coming to ranked opponents. They boasted the #20 defense in the country and were looking to finish with 10 wins for Coach Dan Hatfield.
53,249 fans were in attendance to see the third matchup of the Dawgs and the Hawgs. Arkansas took an early lead with a field goal. But in the first minute of the second quarter, Lars Tate ran one in from the 1 yard line to give the Dawgs a 7-3 lead. But Arkansas answered with a touchdown pass and took a 10-7 lead into the locker room. Georgia’s offense continued to struggle in the third quarter and Arkansas built their lead to 17-7.
But the Dawgs took control in the fourth quarter. John Kasay kicked a field goal to get the Dawgs within 7 before quarterback James Jackson tied the game on a 5 yard run. With the game tied at 17, defensive back Carver Russaw intercepted an Arkansas pass and ran it back into Hawgs’ territory. A pass from James Jackson to tight end Troy Sadowski set up John Kasay for a game winning field goal attempt. The kick was good and Georgia defeated Arkansas, 20-17. James Jackson was named the MVP, rushing for 72 yards and throwing for 148. The Dawgs finished the season 9-3, their first 9 win season since 1983. 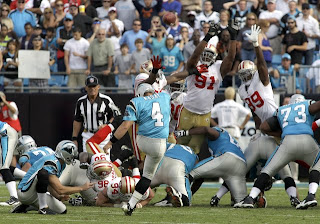 John Kasay: Still kicking in the NFL after all these years

Of the Georgia Bulldogs' 45 bowl game appearances, two times the Dawgs have visited the Liberty Bowl. Here's a quick look back at Georgia's first visit to Memphis: 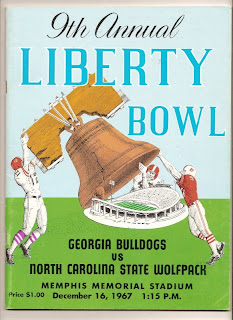 Vince Dooley's fourth season in Athens was met with high expectations. The Dawgs opened the season at #5 in the polls and was one of four teams featured on the cover of Sports Illustrated in their college football preview issue. The team was lead by standouts Bill Stanfill and Jake Scott and rose to #3 in the ratings. But a loss to Ole Miss in October (29-20) followed by losses to Houston and Florida resulted in a disappointing 7-3 season. 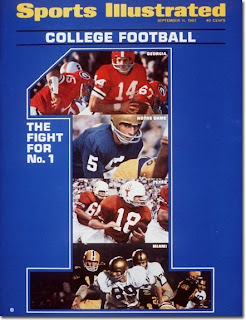 The Dawgs accepted a bid to take on North Carolina State from the Atlantic Coast Conference. The Wolfpack had finished the season 8-2 and had climbed to number 1 in the ranking following an upset victory over Houston. But a loss to Clemson late in the season cost them an ACC Championship. They were lead by their defense, known as the "White Shoes Defense" and by ACC player of the year, quarterback Jim Donnan. The same Jim Donnan who would later become coach of the Georgia Bulldogs.

On December 16, 1967, the Dawgs took the field against the Wolfpack in front of 35,054 fans at the Liberty Bowl stadium in Memphis. Donnan gave NC State the first lead of the game, ending a long drive with a touchdown pass. Georgia was able to tie the score at 7 before the end of the first half, after marching 68 yards for a touchdown. Quarterback Corey Moore completed four passes to set up a one yard score by Ronnie Jenkins.

The second half continued to be a defensive battle. NC State took the lead early in the fourth quarter, but Georgia got the ball back near its own goal line with a chance to go the length of the field for the tie. After driving 96 yards, the Dawgs were faced with a fourth and goal at the NC state 3. Corey Moore pitched the ball to Lawrence, who was stopped at the 1 yard line. NC State held on for the 14-7 victory in a game in which Georgia outgained NC State 276 to 207. Georgia finished the year at 7-4. 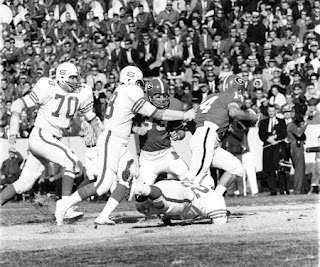