The complete schedule for all 12 SEC schools for the 2011 football season was released this week. Here is a quick look at the top games this fall (thought this could all change throughout the season).

Auburn is lucky that the Iron Bowl takes place at the end of their schedule. Alabama will be looking to get revenge for the 28-27 loss last season. Auburn lost so much talent from last year's team, but by the end of the 2011 season, the new players should be comfortable and ready to welcome the Tide to the Plains.

Last time they played in Tuscaloosa, Mount Cody saved the day for the Tide. Can Derek Dooley finally get things turned around in Knoxville?

I know Ole Miss is horrible, but it will be interesting to see what happens to BYU students who come to the Grove. Does the BYU administration kick them out for just being there?

The Dawgs lost in overtime to a bad Gators team last year. Now that Urban is gone, can Coach Richt turn around Georgia's fortune in the series now that a Georgia grad is on the sideline for the Gators?

I have a feeling the outcome of this game may decide the SEC West Champion. I expect Arkansas' offense to be even better this year with their experience at receiver and a star at running back. Arkansas has stolen victories from LSU of late.

The Tide crushed the Gators at home last fall. Will Muschamp have his team ready for this game which begins a tough four game stretch for the Gators that includes Alabama, LSU, Auburn and Georgia?

Carolina had the Tigers beat in their first meeting last fall but turnovers cost them the game. When the two met again in the Dome, even hail mary passes were being caught for touchdowns. Lattimore and company were able to knock off Bama at home last year, can they beat another defending national champion in Columbia this fall?

The country will be pulling for Boise to beat the Dawgs. I sure hope we are ready to send them packing just like we did back in 2005. Georgia typically shows up in these situations. I definitely don't want to be the team that let Boise State get the SEC monkey off their back.

LSU hosts the defending Pac-10 at Jerry Jones' football palace in Dallas. It should be quite a show!
Posted by Streit at 1:11 PM 8 comments:

North Campus Tailgating: Is It Really 'Back'?

While the supposed official 'Gameday Gameplan' website has not yet been updated, new regulations for the 2011 tailgating on North Campus have been issued.
The highlighted changes in the media reports include: 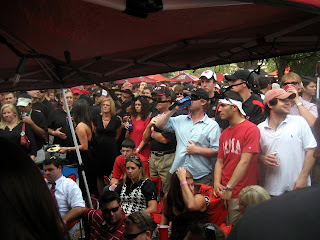 2008 seems like eons ago... From UGA/Bama Blackout, crowd watching on TV the UF/Ole Miss game
In reality, not a monumental change. Tailgating is now feasible on North Campus with a 5 hour window, and I do anticipate North Campus not being a vast, empty wasteland as it was last year. But will there still be grumbling? Sure; alumni will not be completely placated.
I think there still needs to be more flexibility in terms of time and setup... while the time window for setup now is perfectly reasonable for 12:30 games, having to wait and setup until 10:30 for a 3:30pm game is a stretch. And 2:30 for a 7:30 ESPN game just ain't happening.
If the University wants to address North Campus "destruction" and general inebriation, why can't we just bring back the 7am setup rule, and actually enforce the rules? You would think the University Police, of all people, would love to enforce some real laws.
Hopefully McGarity at least will continue to re-evaluate the regulations each off-season and will also make vast steps in providing a realistic infrastructure this fall on North Campus (adequate numbers of trash cans, trash bags and Port-a-Potties are all good starts).
At the end of the day, an Alumni group should establish the broad rules of North Campus tailgating (what you can bring, what you can't bring, and setup times) and allow the police to enforce the laws otherwise on the books. After all, Ole Miss is structured this way, has pretty permissive rules and they actually get positive press for having a good, safe, yet legendary time.
Posted by Gov Milledge at 3:05 PM 3 comments:

Pro Day for Green, Houston, and others

Georgia will host an on-campus pro day tomorrow at 10:00 AM to showcase former players who will be available in the upcoming NFL Draft. The day will be highlighted by early entrants AJ Green and Justin Houston, but will also be important players like Kris Durham who were not invited to the NFL Scouting Combine in Indianapolis last month. Here is the full list of participants:

AJ Green is the biggest name, and the receiver from Summerville is most likely going to be taken in the Top 5. There has been a lot of press covering AJ since he made his decision to leave early. Here is a video that takes a look at the workouts he has been doing to prepare:


For those interested, you can watch the Pro Day online at ESPN3.com.

Good luck to all the former Dawgs tomorrow!
Posted by Streit at 10:50 AM 1 comment: