Is a jersey worth multiple games?

***UPDATE - AJ has been suspended for four games. He should have went to South Beach, maybe then he would only gotten two games. Oh well, he basically missed four games last year anyway. It will be nice to have him healthy for the Tennessee, Kentucky, and Florida games this year.


I think we have all heard the story (rumor?) that the reason AJ Green was held out of Saturday's game had nothing to do with Agentgate and more to do with a game worn jersey he sold. Putting 1 and 1 together, I figure it must be a bowl game jersey since we all know that regular season game worn jerseys are sold on the Georgiadogs.com web auctions and at FTX bookstores for way too much money. Players are typically given their bowl bowl jersey as part of their gift package (which often includes other pricey items like iPods and clothes).

So, what is at question is the sale of an autographed AJ Green jersey from either the 2009 Capital One Bowl or the 2009 Independence Bowl. (I don't know about about you, but I wish the University would buy back all of the Independence Bowl jerseys and burn them. Thank god we will never have to go to Shreveport again,or for at least a long time since the SEC ended its tie in.) If there is any program in the country who should know how to prevent players from selling memorabilia, it should be Georgia. The NCAA had to create rules on how to handle the situation following the selling of 9 SEC Championship rings by Dawgs players back in 2003. For this to happen again looks pretty bad, even if the sale of a jersey from a crappy bowl game is very different from the sale of a championship ring.

Back in 2003, all of the players were initially ruled ineligible but then reinstated once they paid the money back. Coach Richt also said that if Georgia would have won the 2003 SEC Championship against LSU, those players would have had to pay for their own rings. Seems like there is at least some type of precedence for this issue. AJ Green missed last Saturday's game and apparently has already paid back the money. The NCAA should be able to make a decision and the fact that this has dragged out this long is ridiculous.

If he did indeed sell his jersey, then AJ got the penalty he deserved. If Marcell Dareus only got two games at Alabama for attending a party and receiving nearly $2,000 worth of free stuff, then AJ green getting one game for selling something that was actually his property seems fair. I hope AJ takes the field in Columbia this Saturday, but I also hope he is running as many stadium runs as his legs can handle during practice this week. 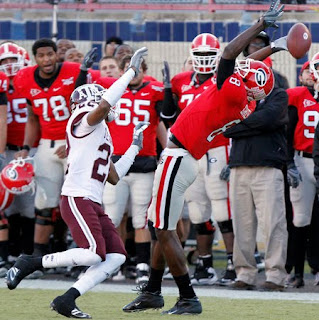 Is this jersey worth a multi-game suspension?

Remember Dareus' penalty was reduced to 2 games because of his mother's death. His original penalty from the ncaa was 4 games.

Also, when has the ncaa ever issued a "time served" punishment?

I'm betting he does not return for the SC game and maybe not even Arkansas, if it is true that he sold the jersey for $1000 or more. Hope i'm wrong tho.

Just got confirmation ab ncaa rules: if the jersey was sold for between $700-$1000 then he must serve a 3 game suspension.

I'll be shocked if we see AJ play this weekend.

Just damn. And thanks a lot AJ. You could've landed the entire program in a lot of trouble & clearly you don't give a shit about your team.

So its ok to take expensive gifts as long as they come from a bowl sponsor that's in bed with the NCAA? Just wanted to make sure I've got that straight.

Ally...
Why would Dareus' mom's death have ANY bearing on his suspension?
The NCAA are idiots.

He'll be cleared to play today.

I can't get rid of the fantasizing feeling that this will all result in coming back next year because he didn't get enough this year.
With eyes shut and ears covered..."HMMHHMMHMMMHMMHMMHMH"

I'm not so sure he will be cleared. During the teleconference today, Richt said there was no update from the NCAA. Until I hear it out of his mouth, I am going to assume the worst. Even without AJ, we at least get TK and Ealey back against the gamechickens.

AJ will have had a very good Freshman season, miss 4 games with a dreadful team his sophomore season, and now might not play a game until we have 2 losses and out of the SEC race. I'm guessing he won't have a whole lot of fan fare at his January press conference announcing he will enter the NFL draft.

At what point does the NCAA limit what a student athlete can sell of his personal belongings?

I sure as hell hope Aaron Murray did not sell his Snelling Dining Hall $2-off coupon for a buck...he could miss 6 games.

I know it's different league, but Big Ben raped a chick while his bouncers watched. This is also a 4game suspension.

Hell Walter, you pulled a gun at a league game and didn't get suspended. I know we had issues with the league office, but this is a whole new level of hypocrisy.