BNE's Blasts from the Past: Kenny Irons

In honor of Auburn's Thursday night 17-14 victory over the Western Bulldogs, we bring you BNE's first blast from the past (hopefully a weekly series): an amazing 2005 interview with former Tiger running back Kenny Irons.

David Irons, Kenny's brother and former Auburn teammate, on his brother's prowess: "I told him the end zone is his zoo and if he runs to the end zone he can be with all of his little animal friends. I just told him to treat the football like a banana. You treat the football like a banana and you won't let anybody at the zoo take your banana peel. He was like, 'Yeah, that's true.' And I was like, 'Kenny, but it's not yellow, it's brown.'" 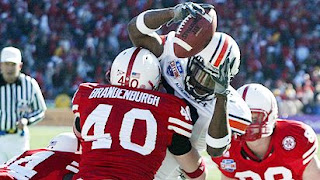 And those Nebraska jerseys aren't black, they're red.
And Kenny himself discusses other sports: "I tell people that I play water polo and if they ask me what position I play I tell them right water. I don’t even know if that is a position but I tell them that I play right water."
Posted by Earl at 7:00 AM

Labels: Auburn, Blasts from the Past, Kenny Irons

Another quality quote from the Irons boys:

A few weeks ago I was working check-in at LAX airport for the rookie conference held in LA. JaMarcus Russell never said a word, Dwayne Jarrett dissed Keyshawn, and Bengals running back Kenny Irons brought more luggage than I’ve ever seen in my life. I asked him what was in the luggage, an innocent question, which prompted Kenny to hoist the luggage and proudly proclaim,

“I got a midget in here to suck my dick.”