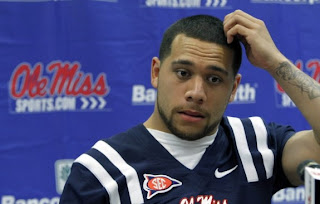 Um, I have no idea who stole that picnic basket, but I plan to find out here at Ole Miss.
Every single one of us got that game dead wrong. I don't blame the hype around Houston Nutt, or the strength of the SEC West this year, or even the new savior of the Grove, Jeremiah Masoli. Ole Miss was just supposed to win this game simply because they were playing Jacksonville State. JACKSONVILLE STATE!! At least Vandy lost to a reputable opponent in Northwestern.

Next to that pick, everyone else seemed to have UCLA pegged over K State which turned out wrong. The other overwhelming favorite, VaTech, produced a nail biting extravaganza of a game that is probably going to be looked back on as not only the best game Boise plays all year, but probably even better than 80% of bowl games at the end of the season. I was not so much impressed by Kellen Moore's on the field leadership as I was the at the turnout of the fans from Idaho. I had no idea that many people lived in Idaho. 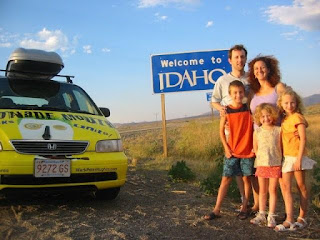 Look kids, Idaho...
Without further delay, I present the BNE Pick 'Em Top 5:
1. Mrs. Streitenbereger heself, Melissa's2010 Picks in top spot with 352 points
Apparently the silver britches in the house aren't worn by Streit, at least this week...
2. woof woof with 345 points
3. Our old friend Dutch is back at 343 points and tied with Hayduke
5. Dawgsman81 rounds out the top 5 with 342 points

And now for our weekly Bottom Feeder of the Week, sponsored by Sesame Street Games. Excluding those who didn't make picks or didn't get their picks in on time, our first BFW is FCS Southeast Cobras. While 19-8 is nothing to scoff at, your point assignment was terrible. A group average of 279 and you managed only 102? I'm guessing you thought this pick 'em would be as competitive as playing NCAA 2010 on Playstation, with the settings turned down to easy, and your user-created FCS Cobras dominating Alabama 77-0. Well it ain't that easy! If you want easy, head on over to our sponsor at Sesame Street Games and take a shot at 'Elmo's Potty Time'. I don't even want to know what that game involves, but I'm pretty sure you and every other kindergartner can beat Elmo at what ever he does in the game...yeah. Anyway, try harder next week and take some tips from my friend...
Heads up, don't watch the Vikings and Saints tonight. I predict Favre will get pummeled and injured in the second quarter and be out for the rest of his career. Instead, watch the Auburn vs. Mississip(p?)i State game instead. Kick off is at 7:30 on ESPN. Don't forget to get your picks in!!!
Posted by AUMaverick at 8:00 AM

If Melissa is still in the top 5 after we get into the meat of the SEC schedule, we should get together a pool and have her play some Vegas lines

If Melissa is still in the top 5 and ahead of Streit after the 6th game, I say we crown her Queen of the Blog for a week and give her some posts.