On Saturday, we had the pleasure to meet some of the best college football fans we've ever come across. The unique nature and passion of this group is definitely worth mentioning to any and all college football fans. If only we had met them out in Tempe last year, we could have planned out a proper introduction to Athens!

The Moustache Nation is a group of die hard Arizona State fans that are all about what I love: going to a road game as a giant force.

Moustache Nation was set up on North Campus at the edge of downtown, and they had a party starting early in the morning. 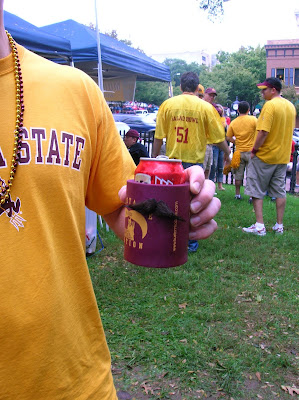 Our friend Diskin and I walked up to their tailgate and were immediately welcomed with great conversation and beer (they have Tecate, we have Natty Light...I'll take the Tecate, please). I'm sure they were concerned at first as to why two morons, one wearing red pants with bulldawgs on them, were walking straight for their tailgate.

Most everyone we talked to were from Tempe, some from other parts of the west coast, and we met a few that were currently living in Atlanta.

Over the next hour or so, we learned the basics of the Moustache Nation:

-They're a large group of ASU fans that are extremely dedicated (we can relate), and pick one road game a year to travel to as a very large group (I'm talking approximately 50 people).

-Several of them often travel to other college football games around the country during ASU's off week.

-Many of them wear awesome moustaches that I could only dream of being able to grow.

-They are named Moustache Nation in honor the great Jake Plummer, who grew a moustache and later began to resemble Ted Kaczynski once he entered the NFL (which I find awesome).

-You know they are the Moustache Nation because they wear yellow jerseys that say "Moustache Nation." The front of the jerseys have a retro picture of their mascot, Sparky, as well as an awesome moustache with "5 Cent Rides" written on it.

-The back of their jerseys say "SALAD BOWL" and "'51." This is in honor of the 1951 Salad Bowl game that Arizona State not only played in, but also lost to Miami (OH). You have to love a group of fans who so greatly appreciate that they played in a bowl called the Salad Bowl, even if they lost. 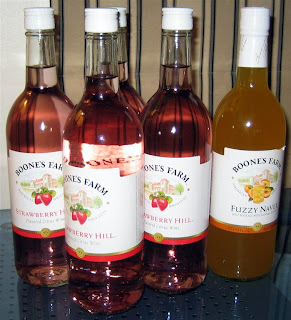 Boone's Farm, a preferred drink of Moustache Nation...along with hundreds of cans of beer.

We also learned some informative things about hardcore ASU fans:

-Just as we saw last year, they continue to show a passionate hatred of their in state rival, and Dawgs can certainly appreciate that.

-You can refer to them as ASU or Arizona State, but do not abbreviate any reference to them as Arizona. That's a douchebag school over an hour away from ASU. Many of our inebriated Dawg co-eds made this mistake at Boar's Head Saturday night.

-Many ASU fans hold a great disdain the Arizona Cardinals. If you listen to why they hate them, you'd certainly agree. It was interesting to learn the inside history of the Cardinals when they were playing on ASU's campus.

We were able hang out with members of the Moustache Nation several times during the day and several even came over to our tailgate to play some cornhole. We also got the chance to hang out with some of them after the game until last call closed out the night.
Unfortunately for our new friends, the gut wrenching game didn't turn out well in the end for them because AJ Green forgot to let everyone know he is a mutant super hero. 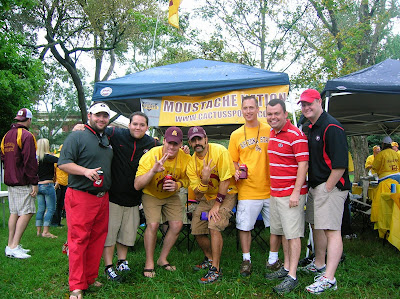 We want to give a big shout out to Troy, Mark, Chris, Steve, Dan, and all the others for hanging out with us most of the day and for showing us their dedication and how ASU fans party.

You can also check out Troy's store at http://www.cactussports.com. Hopefully those koozies will be up there soon!

Also, while we didn't get the chance to talk, thanks to ASU Jay for his leadership of the Moustache Nation and making it possible for such a large group to travel as a force.

Moustache Nation helps to epitomize what college football fandom is all about, as well as doing a great job of representing ASU across the nation.

We salute you, Moustache Nation!
Posted by BulldawgJosh at 2:45 PM

One of the coolest groups of people (and football fans) I have ever had that joy of meeting. I was presently surprised with hi-fives and handshakes for the mustache I have attempted to grow this season.

Here's to you, Moustache Nation.

Some say you couldn't put a 'stache on a koozie, not the Nation, though.

On a side note, it's official, I can buy my Arizona State t-shirt now that we went 2-0. Hook me up Cactus Sports! My new favorite team in the Pac-10.

Nice. I guess that's why we didn't see you over on Hull Street? We hosted some Devils of our own. I hope we'll see you guys on Saturday. I might just come hang out with ya'll as I'm bach'n it this w/e.

Also, I was all over the Tecate as well. That's a great thing about Sam's. Mexican Variety 24 pack. Sweet. I forgot how easy Tecate goes down.

Josh, I hope I didn't offend with the text. I thought you guys were in 122. That was dirty to take off to 3-whatever-it-was.

During the last month I've looked for information related with the moustache nation from Arizona but did not find anything, until for a coup of luck I found your page and is exactly what I was looking for.

I'm scared about the incredible quantity of buy viagra blogs that I had to dodge to find the correct site.
Thanks for the post!

Gentlemen of UGA,
Thanks again for you hospitality. The Nation set records last year in Athens. We will be invading Madison, WI Sept 18, with future stache debauchery in Columbia, MO. Dallas, TX. and Baton Rouge, LA. Check us out on facebook http://www.facebook.com/home.php#!/group.php?gid=166306765344
Good luck this year. Maybe the Salad Bowl will be reinstated and we will meet again!(w/o super stud AJ Green please)