Well, where do we begin? This was just an awful week for picks, with the theme for picks being hosed, as in we all got hosed. Most everyone in the pool was either .500 or below, with only 4 people managing a winning record for the week. Everything was upside down in college football, with blowouts turning into nail biters, and "gimmes" turning into embarrassments.


First up from out matchups this week, Ohio vs. Tennessee. Once again Kiffin managed to embarrass himself by playing down to Ohio and squeaking out a win after giving Florida fits last week. Another squeaker this weekend was Arizona vs. UGA. What happened here Dawgs? I thought UGA found their offense last week but instead they end up winning on a last second field goal. I hate to say it, but UGA has to get back to running and learn ball control or LSU will chew the Dawgs up next week. 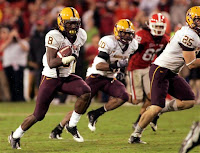 Jarrell Holman taking one the other way.

However, the implosion of the week goes to Ole Miss and Jevan Snead. The Sports Illustrated curse aside, I'm glad Ole Miss lost early so we wouldn't have to hear the hype machine the rest of the season. This team should not have been ranked as high as 4 and I don't care how much talent they have. In addition to this let down, Oregon absolutely slapped Cal in the face and sent them out of the top 10 (along with PSU...WOW, again to Iowa??). Just about everyone got hosed on this one, as Oregon managed the game extremely well with a balanced run & passing game, and sticking Jahvid Best to only 55 yards. 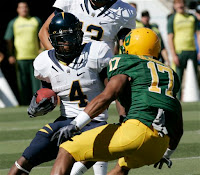 Not a Heisman performance.

In other games, Beamer Ball managed to hold the Canes in check in an rainy game in Blacksburg, and Georgia Tech surprised a lot of folks by changing their defensive scheme, allowing only 150 yards of total offense by UNC. Michigan and LSU both managed to pull out close wins, while Florida swamped Kentucky even without Tim Tebow. And finally, Auburn posted another 500+ yard game, beating Ball State (but failing to beat the spread), with Chris Todd throwing 5 touch downs on 287 yards. That's 11 touchdowns for the season with over 1,000 yards.

Now let's get down to our overall standings...


And, now for our bottom feeder of the week, sponsored by www.flip-coin.com . I am proud to introduce this week's new bottom feeder, Tankdawg to our pool. With an overall record of 3-44 and a measly 13 points, Tankdawg is displaying the kind of skill and smarts it takes to play in the Sunbelt. Even the Magic Eight Ball had a better record last week. I suggest flipping a coin for your picks next week...maybe visit our sponsor, www.flip-coin.com for some help.


Tune in this week for our matchups and submit your picks. We will have our usual great matchups with a special salute honoring our armed forces with the Air Force vs. Navy game. This is a classic game featuring two of the finest military academies, which should stir the fires of patriotism in every true blue-blooded American. GO AIR FORCE! BEAT NAVY! 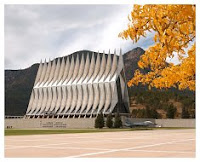 The beautiful Air Force Academy Chapel
Posted by AUMaverick at 8:00 AM

thanks for the recognition... 8-4 last week.

I'm surprised at the picks this week, and how badly everyone got hosed. 8-4 is something to be proud of, especially this week.

Whatever you did, keep it up. This week's matchups could have just as many upsets with UGA & LSU, Bama & Kentucky, and Oklahoma & Miami.

It's all part of the master plan.

BDJ...why do I read your comment and immediately hear "Don't call it a comeback" in my head?