LONG WAY TO FIND A WAL-MART: ROAD TRIP TO FAYETTEVILLE 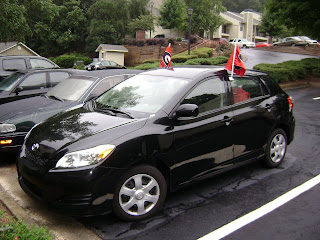 Is there such a thing as a good rental car? Only if it's red or black!

It started off uneventful because, well, there's nothing of note in north Alabama or Mississippi. However, north Alabama does appear to be the bingo capital of the world. We counted no less than 10 bingo parlors in a 10 mile stretch.

Just after lunch, we rolled into Memphis and ate some of the best ribs I've ever tasted here: 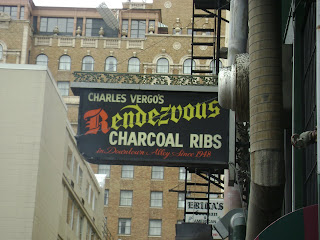 The rest of the drive was pretty boring. There's nothing in Arkansas. Nothing.

However, once you get on I-540, the 45 minute drive to Fayetteville is awesome. You're surrounded by the Ozarks and it makes for a hell of a sight to see.

We also failed to see any UGA fans driving to the game (I don't blame you).

We rolled into Fayetteville at about 9pm, and immediately went to the stadium. Its an impressive place, and the video screen is massive.

We continued through the campus, which also turned out to be much nicer than we anticipated.

Rolling into Dickson Street, we saw a good number of bars and restaurants.

We met up with our friend Tyler, a native of Fayetteville, and hit up a couple bars including Brewski's and the Hog Haus Brewery.

While in Hog Haus we be-friended a Bama and LSU fan that gave us some good information on the town.

The upsides to Fayetteville were the good number of bars (probably around 15-20), and plenty of good looking ladies. Again, I was worried in the mountains, but there's nothing to worry about in this town.

The downside is that most of the bars ended up having a cover after about 11pm. Pretty lame, but I guess it's to be expected. It's better than Auburn, where they have covers on all 3 of their bars.

Unfortunately, it was only after we left for the night that we found out that there is a piano bar in downtown Fayetteville.

We headed out from our hotel in Bentonville, aka Wal-Mart Land, early on to get a head start.

We saw a Chik-Fil-A, and immediately stopped so that we could get something of Georgia and some decent sweet tea (real sweet tea doesn't exist in Arkansas). 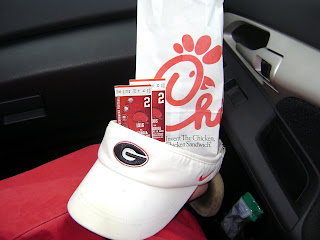 Everything you could ever want.

After getting back into Fayetteville, we traveled through campus trying to figure out the parking situation. It was about 11am, and while some were out tailgating, the campus was not packed by any means.

After about an hour of driving around and talking to a cop, we finally found a parking garage that we were able to park in for free (wasn't suppose to be free, but we're that good), and that was a good halfway point between downtown and the main area for tailgating.

There wasn't much open downtown in the morning, and we ended up back at Hog Haus Brewery.

Dawg fans started to fill the upstairs bar, and we met some great Dawg fans from Atlanta and Kansas City. 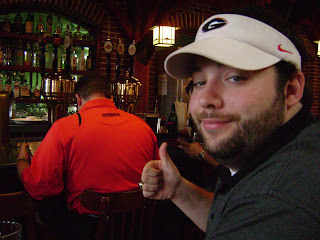 Beer and football, these are things that I like.

We also met our first Arkansas fans that were really into having visiting opponents in town and approached us to talk about football.

At this point, of the Dawg fans we had encountered, we were by far the youngest around, and the Dawg ladies were few and far between.

We headed out to campus about 3 1/2 hours before the game.

Arkansas' campus is beautiful, and you can tell they've got a lot of money pouring into this school (having the Walton family and Jerry Jones doesn't hurt). The arbotoreum that borders downtown is very similar looking to UGA's North Campus. 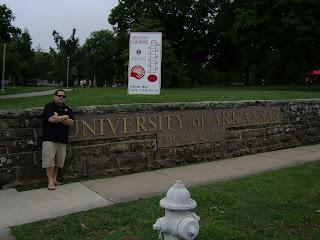 That's right, I'm too cool for your sign. Deal with it.

Tailgating at Arkansas has all the necessities, but it's just normal and basic for the most part.

One thing that pissed me off was how all the lots surrounding the stadium were permit only, but some of them half empty before the game. I would have thrown down the money for one to avoid the long hill to our parking deck.

We did stop and talk to a lot of Arkansas fans on the way to a UGA tailgate. While my motivation was mainly to mooch their television to see the Gator/Vols game, I did want to really meet their fans. Up to this point, their fans had not been outgoing for the most part. 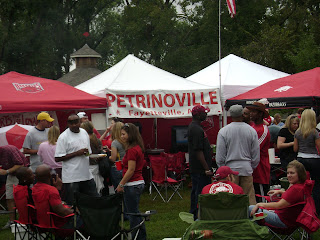 I guess that's something to brag about? Whatever.

On the walk through campus, we did meet some undergrads outside of some dorms. These guys were real cool, and like all good college students, they were most interested in drinking (we did provide them some needed cups to hold said beer).

We did tell them the glories of Athens, and how they will need to come to the game next year to see some real partying.

One of the better parts of tailgating was where some local UGA alumni were stationed in a Gazebo in the Gardens (really just very nice landscaped green space). It was a pretty good set up, and having that Gazebo was pretty damn nice.

I'll have to give a big thanks to the Dawgs that hosted that event and allowed us to crash it. To the Kansas City Dawgs and the ex-Gwinnett Dawgs now in Fayetteville, THANKS!

That UGA tailgate was a great time, and it was a relief to finally be around a substantial amount of Dawg Fans.

Arkansas fans are nice people, and when we engaged them, they were great.

However, they are probably the least outgoing to meet opposing fans as I've ever experienced.

Arkansas fans can also be described as lacking in originality. The best insults we received were "Georgia Sucks," and "Fuck Georgia." Not too original there.

There was one fan that held a "This Guy Sucks" sign over Bubba and I. However, we thought it was hilarious and wanted a picture of it, but the guy ran off.

Stadium=awesome. Pretty good design and setup, it was nice inside, and great views of the field. Everything you hear about the scoreboard is true, and that place can get pretty damn loud (even if they're not using their PA to increase the noise).

Unfortunately, Bubba and I got to our seats just before kickoff, so we did not get to see the pre-game pomp and circumstance.

We sat in the last row of the upper deck, and that was actually a surprisingly good view: 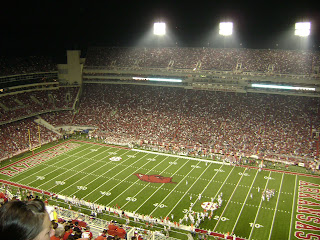 The Dawg fans were spread out through our area, and not bunched together in a typical road game fashion (or perhaps the beer and matching colors confused me).

We did have a pretty fun group of Razorbacks in front of us that we went back and forth with the entire game. Our picture with them provides documented proof of attractive women in the Ozarks: 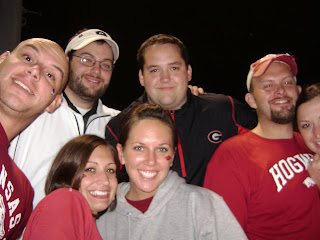 We skipped out of town after game to get a head start on driving back, and we crashed in little rock for the night.

We were able to stop again in Memphis for some BBQ, and we even saw some fellow Dawgs stopping there as we pulled out. 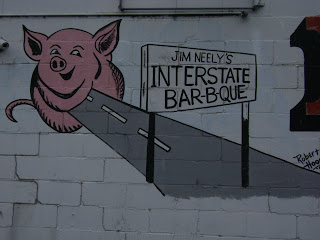 Not asking everyone if they hated Target or if they secretly hated Wal-Mart, but weren't allowed to say anything.

Not getting my picture with the golden hog statue in the Gardens.

Continually telling that Kansas State fan that he was awesome for wearing his team's shirt and not selling out to his friends' peer pressure (I was in an "altered" state).

Fayetteville is an awesome college town, one of the nicer stadiums you will go to, the women are good, more bars than most towns, the campus is beautiful, and it's definitely worth the trip.

If you do want to drive, don't. Maybe do it once, but that's it. Take the plane.

There is nothing southern about Arkansas. That's okay, but it's the truth. 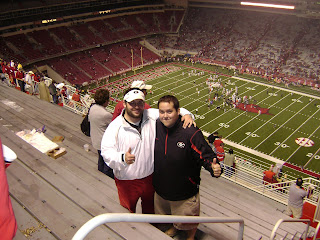 Victory pics are the best!

Posted by BulldawgJosh at 5:30 PM

We were at Hog Haus Saturday for a couple of hours before the game! Hate i missed y'all. Nice place to visit for a couple of days, but it can't hold a candle to Athens. Then again, not much does.

Seems like a great trip. My favorite part (besides the victory photo) is the fact that both times you went through Memphis you stopped to eat BBQ. Very awesome!

Sounds a lot like my trip, except substitute Missouri for Alabamba/Mississippi. Also, we went to Doe's for lunch/snacks/many, many drinks. Also, I stopped at Loco's, yes, that Loco's in their first outpost west of the Mississippi in St. Charles, MO. It was awesome.
Go Dawgs!

I believe I drove the same stretch of bingo establishments on my way to Stillwater...by any chance do you remember driving by an old run down strip club called "The Boobie Trap"?

Also, you are correct, it blows to drive through Arkansas.

Ally - I hate it we missed you, especially since we were in there for quite a while. I've never found anything that compares to Athens.

Alex - Bubba and I had no other option but to stop for BBQ twice.

Exile - I had no idea Loco's was out that far. I will have to keep that in my memory.

When I went to Ole Miss a few back, I didn't remember all of the bingo places, but I'm sure it was the same stretch.

Off the top of my head, I don't remember seeing "The Boobie Trap." Then again, it might have blended in with all the other shacks.

I am late on commenting on your post, but I was pleased to see that you and Bubba made the long trip to UofA. Being a HUGE DAWG fan myself, yet raised in the state of Arkansas where my parents still reside, I somewhat disagree with you...
1. If you drive, bring plenty of good music and alcohol to distract you from the road construction in AR that has been going on for 25 years.
2. AR is a BEAUTIFUL state. Period. Maybe you were too busy looking for "Mountain Women" in the hills rather than enjoying the view. We are the Natural State.
3. There are extremely friendly, attractive, fun, and outgoing women in the state. Myself and my mother included. You guys must have been looking in the wrong places. However, they do not dress to the 9's like the classy GA women!
4. If AR is not southern, why is it that every time I open my mouth here in GA someone asks me, "Where are you from?" My Southern draw developed over the 15 years I lived in AR. You may have to ask for sweet tea in the Chick-fil-A line, but AR is not much different than GA...there are plenty of rednecks, confederate flags, small towns, and love for football and booze.
5. My parents were at the game proudly wearing their GA red and black. You guys should have joined their tailgatin' party! They were watching the TN/FL on the big screen.
6. I agree AR has a nice stadium, but the tailgating is nothing like Athens. Neither is the bar scene. Too many post game frat parties and greek-ness.
7. There are piano bars in AR, including downtown Little Rock. Actually there are 2. I hope you boys had the opportunity to visit the River Market of LR. Good food, good booze, good fun! I also hope you managed to avoid the Clinton library, the unattractive, double wide trailor on stilts, vaulted over the AR River.
8. Memphis is fabulous! I hope you enjoyed a "Call a Cab" from Wet Willies and the excellent Jazz music heard throughout the streets.
9. I'll answer your ? I hate WalMart. Target is fabulous!
10. Next time (3 or so yrs from now?) you boys need to make the trip to Arkansas with a native AR, GA Bulldawg Girl!