SEC Players of the Year

During Saturday's broadcast of the Tennessee-Florida match up the announcers repeatedly made a big deal about the match up between Eric Berry and Tim Tebow. Berry, arguably the best defensive player in college football, and Tebow, a Heisman trophy winner, were named the SEC Defensive and Offensive Players of the Year in 2008, respectively. Verne and Gary, on a number of occasions, mentioned that this was the first time the defending offensive and defensive players of the year in the SEC had met the following season. That is quite an amazing fact, but also consider that in 2003, Georgia had the defending SEC offensive and defensive players of the year on the field for the same team.*** 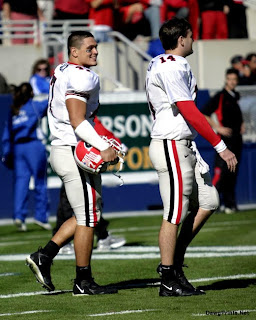 ***(Greene was named Offensive Player of the year in 2002 by the SEC coaches. The Associated Press awarded the honor to Artrose Pinner of Kentucky.)

In my best Edith Bunker voice, "Those were the days!!"