"Devil, just come on back, if you ever want to try again.." The Arizona State Preview

Arizona State travels nearly 2,000 miles to seek some revenge for the 27-10 beat down the Dawgs handed Arizona State in the desert last fall. Last year, the Sun Devils were talking a lot of trash, even passing out signs that said "Bring on Georgia": 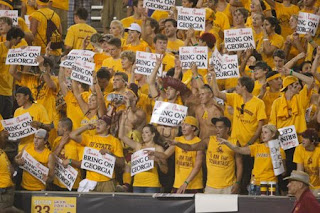 This year is a different story. After struggling to a 5-7 record in '08, the Sun Devils come east very quiet and heavy underdogs. I expect the results to be much the same as they were last fall.

Who are these guys?

As stated earlier, Arizona State was a preseason ranked team who struggled to a 5-7 record in 2008. Gone is quarterback Rudy Carpenter, replaced by senior Danny Sullivan. Up until this point, Sullivan has been more of a game manager, only completing about 50% of his passes for only 1 touchdown. The real offensive leaders on the team are running back Dmitri Nance and receiver Chris McGaha. The line is still questionable at best and if they can't provide better protection for Sullivan than they gave to Carpenter last year, it may be a long night for the Sun Devil offense.

Defensively, the Sun Devils are currently ranked as the #1 overall defense in the country. Granted, that has been against bad competition, but allowing only 150 yards a game is still impressive. For Arizona State's defense to have success against what is suddenly a prolific Georgia offense, they will need big days from DE Dexter Davis and DT Lawrence Guy. Shutting down Georgia's running game will be the key to stopping Georgia from marching up and down the field at the same speed they did last week.

What are the Dawgs going to do?

Defensively, the best thing the Dawgs can hope for is a repeat performance of last fall. The Dawgs entirely shut down the line of scrimmage, repeatedly hitting Rudy Carpenter and holding Nance to 12 yards on 10 carries. Georgia has proven it can shut down running games but we know that is not the issue. Arizona State's line is week and I think this the week Willie may finally get creative with blitzes. If he does, Justin Houston will benefit the most and could be in for a huge day. Also look for Georgia to conintue to use 5 DBs in passing situations as Akeem Dent and Darius Dewberry have continued to be slowed by injury.

After the passing fireworks last week, I think this will be the game where we see an offensive explosion from the running game. Caleb King looked strong on his 11 carries last week and Richard Samuel showed his homerun power on the 80 yard TD run. Look for a combined 35 carries between the two and around 200 yards on the ground. Orson Charles role in the team will continue to grow and AJ Green should have another big day.

What is going to happen?

For the first time this season, Georgia will come out and look dominating. The offense will not score as much as it did against Arkansas, but the defense will not be as bad either. A close game at half turns into a blowout in the second half.