I don't know about anyone else, but I am having a outstanding time with the pick'em so far this year. This season has featured some outstanding matchups, complete with close games, upsets and resurrections which makes the Pick'Em that much more fun!
First off, the Canes are for real this year. After watching the U and FSU, I was skeptical (and looks like most of you were too), but after the Canes squashed the Jackets I realized this is one fast team with a nasty swarming defense. Keep an eye out for these guys when they travel to Blacksburg. And speaking of Blacksburg...Beamer Ball managed a very close win 16-15 over a resurgent Nebraska. Give Bo Pelini one more year and Nebraska may just be back in the national spotlight.
In another close game, we all got hosed by picking the SmurfCats of Kentucky who managed a come from behind win over Louisville to win the Commonwealth in a close one. Notre Dame managed to win despite their valiant efforts of doing everything wrong. Notre Dame has compiled almost 300 yards of penalties in 3 games, including almost 100 yards this weekend. It looks like they are really trying to get Weis fired. 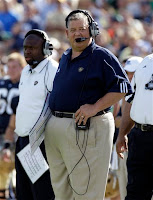 Jimmy Clausen hates me.
From the SEC, it looks like everyone picked correctly, with the only exception of Miss. State & Tennessee throwing a cog in the works for everyone (not me though). UGA showed great improvement with their win over Arkansas as they finally found a running game while the D held Arkansas to only 77 yards on the ground. Auburn builds on an unbelievable start, going 3-0 and beating West Virginia in a muddy brawl on the plains. The Tigers, managing only 400 yards of offense, won the game on D with 24 points coming off a +6 turnover margin. UGA will host Arizona State and Auburn will take a break with Ball State at home.

Way to find the ball guys. 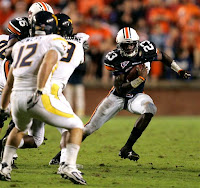 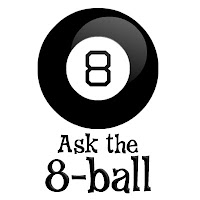 Remember to get your picks in for this week. Our key matchups this week feature Miami and Va. Tech, UNC and Georiga Tech, Cal and Oregon, Florida and Kentucky and my challenge pick of Indiana and Michigan. Good luck!
Posted by AUMaverick at 8:00 AM

I didn't do my picks. I was too busy driving to Arkansas.