As the 2008 SEC Championship Game between the Alabama Crimson Tide and Florida Gators nears, many in the media are quick to point out their clashing styles. Alabama is a strong defensive team with an offense built around its strong rushing attack. Florida is a high powered offense that relies on turnovers and special teams to set up quick scoring strikes. As their differences may be glaring, you may be surprised to see how similar these teams are in the numbers they have put up during the 2008 season.

As expected, Florida and Alabama dominate as the statistical leaders in the SEC. Of the 31 major categories which are tracked on the SEC’s statistics web site, either Florida or Alabama ranks first in 21 of those categories. In the following categories, the teams hold the first and second spot:

Other categories where the two teams were also ranked closely to each other were: 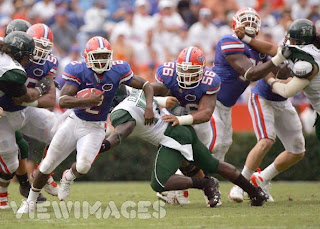 Adding Demps to an offense that already had Tebow and Harvin meant a lot of points on the score board for the Gators in 2008.
Common Opponents:

Alabama and Florida shared 6 common opponents during the 2008 season. Here’s a look at each of those games, how each divisional champion fared, and which team’s victory was more impressive.

Both of these games were blowouts, with the Alabama and Florida each clearly dominating one half of the respective football game. The Crimson Tide opened a huge 31-0 lead on the Dawgs in the first half and cruised to victory (despite some late garbage time touchdowns for Georgia ). Florida turned a close game at half into a complete destruction and without a late touchdown pass from Joe Cox would have landed an almost 50 point victory. 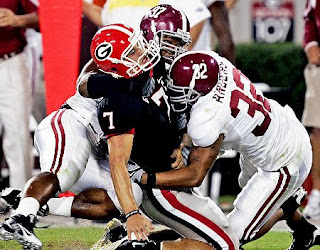 The Georgia Blackout failed miserably against the Crimson Tide.

Both teams struggled with Houston Nutt’s surprising Rebels team. Alabama jumped out to a 24-3 lead at half and was able to hold off 17 unanswered points from Ole Miss to win 24-20. Florida struggled to find a rhythm with its offense and a missed extra point ended up being the difference as the Gators fell 31-30. 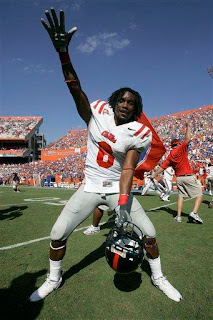 Ole Miss stopped Tebow on a fourth and 1 and the celebration was on.

Florida destroyed the Tigers, building a huge first half lead and never looking back (and getting some revenge for the loss in Death Valley last year). Nick Saban’s first trip back to the Bayou was ugly, as the emotion was almost enough to push the Tigers to victory. But a costly mistake by Jarrett Lee in OT led to the winning TD for the Tide.

Alabama jumped out to a huge 35-7 lead at the half and cruised to a big victory over the Hogs. Florida struggled in the first half, but poured it on in the second half (scoring 21 points in the fourth after some careless Arkansas interceptions).

Alabama kept the rival Vols from putting points on the board while earning a workman like 29-9 victory on the Third Saturday in October (that was actually the fourth Saturday in October). Florida scored 17 points in the first, but if not for two UT turnovers inside the Gators’ 5, the game might have been a different story.

Alabama looked sluggish coming off the big win over Georgia and barely held on to defeat the Wildcats in Tuscaloosa. The Gators used multiple blocked kicks to set up touchdowns in a complete destruction of Kentucky in the Swamp.

On paper, these teams look to be very similar. No team holds a distinct advantage either statistically or in common opponent victories. This game will most likely come down to which team forces the other team to make mistakes. I look for a close game at half, but the Gators’ offense to be too strong in the second half. 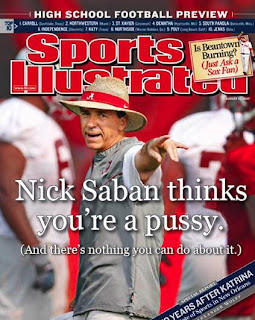 ...but that won't stop the Gators from winning this game.

On Alabama's and Florida's high statistical rankings, some would say, well, that's why they're both playing in the game. And that's true, but not every SEC Championship Game ends up having the most obvious participants playing in it. A perfect example is last year with LSU vs. Tennessee, and not LSU vs. Georgia. This article really shows Alabama's and Florida's dominance this year. It's staggering. And disappointing to the Georgia fan.