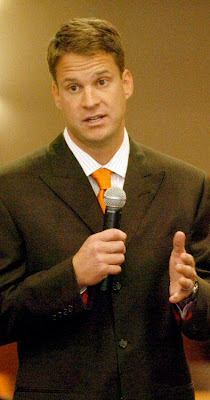 I'm listening to the Lane Kiffin press conference at the moment, and I gotta say I am thoroughly impressed so far with his answers to all of the questions being thrown at him.

He is showing a lot of respect to the university, the program, Fulmer, and the job itself.

He has repeatedly said how great everything is at UT, and that he is blown away by the facilities and alumni support this school has compared to when he first went to USC as an assistant.

He just said, "My agent won't want me to say this, but I'm not going back to the NFL. Not because of anything about the NFL, but because of Tennessee."

One of the biggest concerns I had with him coming into this job was that he would not view it as a destination job. I figured his background and youth would lead him somewhere else in a few years if he experience success.

Well, if you put weight into what he is saying at this press conference, he just completely shattered any thoughts of not understanding the magnitude of taking over a program like UT.

The biggest concern Vols fans have had is the ability for a new coach to recruit nationally. Kiffin is just throwing out candy to any Vols fans about how he wants to close off the state and build upon the national recruiting he did at Tennessee. He also had some great answers to a question about how he would recruit in the south and the SEC.

I have to think that his statement on closing off the state is a hint that he will not give up on Marlon Brown in Memphis, who is reportedly down to choosing between UGA and UT.

He also said that he couldn't wait to hear Rocky Top after a victory over Floriduh next year. Wow. Either he's as arrogant as Urban Meyer or he doesn't know what he's in for.

The Knoxville News Sentinel is reporting that he will have a 5 or 6 year contract worth $2 million a year, and that it will increase to $2.75 million by the end of the contract.
Posted by BulldawgJosh at 2:30 PM

The kid, and that's what he is in terms of coaching experience, is in for something. The press conference seemed very forced, but that's how Kiffin seemed with the Raiders too. And the shot with AD Hamilton holding up the jersey looked forced and awkward on both parts. Its either going to be a great success or a terrible failure, no middle road here. Monte Kiffin and Ed Oregeron will probably be good hires, though. But, Lane ain't ready to lead. What did the Vols just get themselves into?

And, hey, Clemson just hired Tommy Bowden again. Dabo goes 4-2 and gets hired. Isn't that what Clemson always does? But, just as in Knoxville, your program is what it is...

However, I, like many others, said that Urban Meyer's offense would never work in the SEC...so...