Do You Hate Them Now? 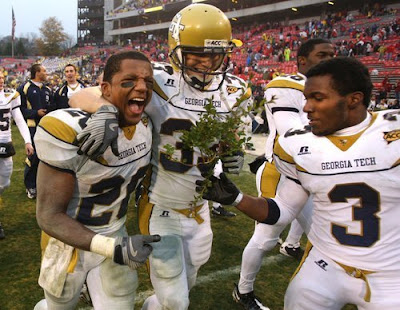 For every Dawg fan that didn't hate Tech, and thought of them as a little brother to smack around once a year, do you hate them now?

I've always felt that Bubba was one of the few Georgia fans I knew that had a huge hatred from the piss and white from North Avenue. Most disliked or hated Tech, but did so in a relaxed manner. Spoiled by winning and short memories, too many people began to take this game for granted. We all have our reasons for hating one team or another, but our 7 year domination caused too much content.

I hope the above picture shows why you should hate Tech and their non-female, nerd filled student population.

Once again, their team tore apart the hedges after a victory in Sanford. If only I had a ladder to reach the bowl game banners Tech holds so dear, then maybe there would be something actually worth taking from Bobby Dodd.

Hate Tech. Never Stop, not for even one day, one minute, or one second.
Posted by BulldawgJosh at 7:00 AM