It's a THREE-Way Tie, Texas Fans

Preface: The writer realizes that it would suck bad if Georgia beat Florida, and then Florida went to the SEC Championship in a three-way tie scenario, especially if the teams were ranked #2 and #3 in the country.

Some of the things I enjoy most about college football are things like the argument in the Big XII South this season. In college basketball, it wouldn't matter because each team involved in the three-way tie (Oklahoma, Texas and Texas Tech) would get into the 65-team postseason tournament. But, not so in college football, and I think that makes it great.

BulldawgJosh briefly posted something on the Big XII South last week in between rants against the Nerds. Most of his discussion centered around the BCS and how people yell and scream too much before everything has played out. And then he briefly gave his opinion about how Texas should play for the Big XII Championship, which I'm sure is an opinion that is held by many people because of the Longhorns' victory in Dallas this year.

I can respect that head-to-head opinion.

But, unfortunately for the Longhorns, it is a three-way tie not a two-way tie that so many Texas fans desparately want it to be. I'm of the opinion that all three teams have to be taken into account even if Texas Tech is the lowest ranked team in the BCS. You just can't simply ignore them. The Red Raiders might as well have not played the games then. 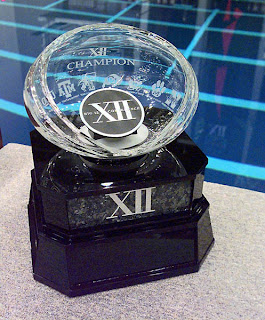 Should the Sooners, Longhorns or Red Raiders play Mizzou for this trophy?

And that's the reason why I like the Big XII BCS tiebreaker more than the SEC & ACC BCS tiebreaker. We all remember the SEC East race in 2003 when the BCS tiebreaker was first incorporated. The SEC tiebreaker states that it takes the top 2 teams in the BCS, and if they are separated by 5 spots or less, then it's a head-to-head matchup.

That would've led the Big XII to place Texas in its championship game. I just can't get by the third team, though. And Texas lost to them.

Let me also take the time to explain I don't like the BCS playing a role in determining conference champions at all. Non-conference games shouldn't be a factor in the conference standings. I thought college football did away with this attitude years ago when it eliminated the possibility of non-conference games like Georgia vs. Clemson sometimes counting towards the SEC standings when Georgia fell short of enough SEC games. (This sounds crazy, but it's true. And it happened quite frequently in the 1970s and earlier. SEC teams wouldn't always play the same number of SEC games as each other.) The idea of non-conference games playing a role in the conference standings was stupid then and it's stupid now.

I would much rather see conferences adopt another tiebreaker like the overall point differential in conference games only, something that ABC's Brent Musberger suggested on Saturday night during the Oklahoma-Oklahoma State game. I can understand if you don't like Musberger, but I liked the idea. He probably stole it anyway.

I don't know who that would place as the winner of the Big XII South, although I would guess Oklahoma with the way they've been scoring points this season. (Writer's Note: It would place Oklahoma in the championship game. Oklahoma's Big XII point differential is 24.3; Texas is at 18.6; and Texas Tech is at 12.6.)

In the end, all three teams have legitimate arguments to be Big XII South Champion. Only one team can go, though, and I have no problem with Oklahoma respresenting its division.

Remember Texas fans, it's a THREE-way tie, not a two-way tie. 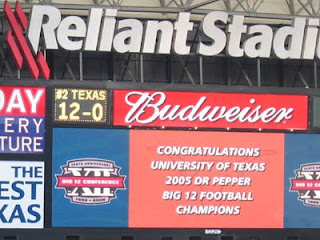 Texas won't be seeing this sign anytime soon, but it might see a "2008 National Champions" sign in Miami. And if that happens, the Georgia fans should be kicking and screaming about 2007.

Sidenote: If the Big XII had adopted the same rule as the SEC & ACC, then technically Oklahoma could've thrown its game against Oklahoma State, allowing Texas Tech to play in the Big XII Championship. Under that rule, Oklahoma wouldn't have had a shot at all of winning the South division given that Texas had already completed its season before Saturday night, and was already in position in the BCS Standings.

Who would Oklahoma rather have play in the Big XII Championship: Texas or Texas Tech? And Texas, Oklahoma's hated rival, would've had the chance to play for the National Championship too, wheras Texas Tech probably would not have had that same chance. 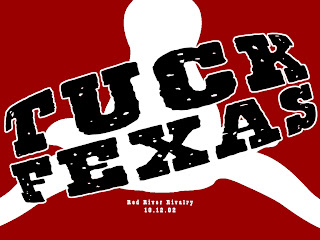 Oklahoma would never want the Longhorns to play for a Big XII and National Title.
I'm not saying that Oklahoma would ever throw a football game, especially if it would knock them out of the National Championship hunt too. But, it does create a moral dilemma.
Posted by Earl at 1:27 PM

You always have a thing with the third team. You never seem to care about the 1st, 2nd, or 4th so much, but always that 3rd team.

Well, they had the same season as the top 2.

And I know what you're referring to...yes, I enjoyed the old bowl system better than the BCS. It was fairer to the teams not ranked #1 or #2.

And, MOST IMPORTANTLY, it provided me with more enjoyable bowl matchups than just #1 vs. #2. The BCS doesn't care about the rest of the games. Pitiful.