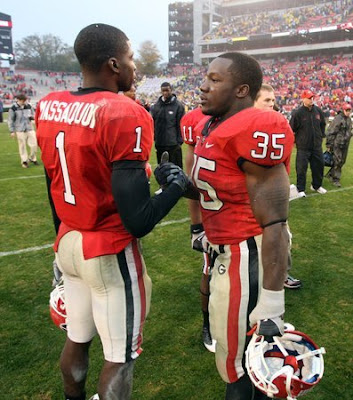 Now is the time to stand strong in the face of adversity. There's plenty of room to criticize, but this is also a time to reflect and realize that we could be the losers that walk around the North Avenue Trade School campus everyday.

While I give my hats off to Tech's players and their coaching staff for playing great, never giving up, and showing a new determination and attitude on the field (as I said here last week that their confidence was the thing that worried me the most), Tech overall as a program is still inferior to us and other institutions.

When I read in articles like this about how their number one goal coming into the season wasn't to win their division or conference, but to beat an in-state rival that isn't in their conference, it just shows the lower status of their program.

I understand how badly Tech wanted to win this game. We have a similar situation with Floriduh. However, our priorities would be out of whack to want a win over the Gators versus a conference championship (except for wanting to beat them as a necessity to lead us to a conference title).

Furman Bisher even states it plainly here that they would prefer this victory over a trip to Tampa.

I truly understand their point, even if it is just a priority for this year. You don't want to lose this game again, and perhaps you didn't think you could win your division. Still, having this as their main priority shows that Tech's program isn't as great as they wish it would be, or as much as the AJC wants it to be.

I don't think Paul Johnson is a dumb man, and I don't believe he would state this as his goal because he truly values such a win instead of a division and/or conference title. However, I do believe he realized it was an easy way to play into the mindset of the Tech fan base and boosters, who have shown to have their priorities out of whack (such as not wishing to interview Muschamp because UGA was his alma mater).

Statements by pundits about how Tech has arrived, how they are the number one team in the ACC(obviously they aren't since they won't be playing this week), are pretty much invalid at this point.

I respect Tech's win on the field this year, and they should brag for winning after SEVEN long years of losing to their most hated rival.

However, Tech still hasn't made that next step because their own mindset is preventing them from doing so.

Johnson is the right coach to change that mindset and re-adjust their priorities to make their program legitimate again. However, it will ultimately be up to their fan base to realize they should listen to him, and that will be difficult. Delusion dies hard.

(Editor's Note: This can be classified as my bitterness post).
Posted by BulldawgJosh at 11:45 AM

As soon as I heard about this my first question was where the f*ck was security when they were damaging & defacing University property???

They've done this before, so its not a surprise. What is a surprise however, is thet we didn't stop them!