The Birmingham News is reporting that Tommy Tuberville has been ousted at Auburn.

Really? Wow. Just one question: Who is Auburn going to find that's better than Tuberville at Auburn? He fits the Auburn mold. And that's important in college football, especially at a place like Auburn.
This has Bobby Lowder's fingerprints all over it. Of course, everything at Auburn does.
Tuberville made one mistake in hiring Tony Franklin to change the offense. It was a big mistake, but it was just one. He has consistently won at Auburn. He has one undefeated season, one SEC Championship, two SEC Championship Game appearances and about 4-5 SEC West co-championships. His record against Alabama is 7-3 and his record against Georgia is 5-5.
Please tell me a better span in Auburn football other than 1983-1989 under Pat Dye. And don't bring up Shug Jordan because I'll just bring up Bear Bryant.
And that's where it lies. Auburn is reacting to Alabama...again. After 6 years of domination in the series, Auburn lets 1 year of subordinate play affect its view on its head coach. Tell me, what coach in his right mind would want the Auburn job after it has just fired a head coach that went 6-1 against Alabama in the past 7 years? Isn't that the stated goal of the Auburn program? To beat Alabama? Didn't Tuberville do that?
Auburn has just reacted to Nick Saban. Saban is a great coach, no doubt about it. But, Auburn had its man that fit Auburn's mold. Tuberville has been coaching against Saban for a long time. He's beaten him before, and I bet he would've done it again if he had the chance. 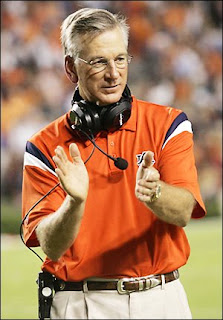 Tommy, come on over to our side. It seems like your friend Mark Richt needs a defensive coordinator...and we'll beat Auburn's ass every year.
It seems most Auburn fans would've liked for Tuberville to have stayed on. But the Auburn boosters, and most importantly, Lowder wanted Tuberville gone. Lowder finally got him 5 years after he originally wanted to, and 4 years after an undefeated season.
Boosters are pointing to firing too many coordinators and not recruiting up to par with Alabama and Georgia. Well, isn't that how Auburn's always recruited? Its always had the basic recruiting philosophy of "coaching up" the kids to the tough, physical Auburn way. And its worked for years.
Auburn, may you get what you wish for. An ass kicking by Alabama for years to come.
Posted by Earl at 5:46 PM

Praying Damon Evans is reminding CMR that he has a boss by firing Willie & throwing a truckload of cash at Tubs for the DC job.

I don't give a damn what our president and AD are saying, they fired him under orders from Lowder and his piece-of-shit underlings.

I agree with B n E and its commentary. Hell, I'd support UGA even more than I already do if Tubbs backed Richt as a defensive coordinator. Will it happen...no. Tubbs will end up at Miss St.

Now, smart thinking would say that they wouldn't have fired Tubbs without having someone lined up. If Leach shows up, which he might, I guarantee a midnight jet rendezvous was involved.

If not Leach then who else? La Tech or Tulane's coach? OH GOD NO! TCU's coach...maybe. A young coordinator like Nix or Applewhite? We sure as hell aint getting Muschamp back. What it all comes down to now is finding someone with no knowledge of the bullshit micromanagement the board of trustees imposes. No amount of cash is worth that backstabbing.