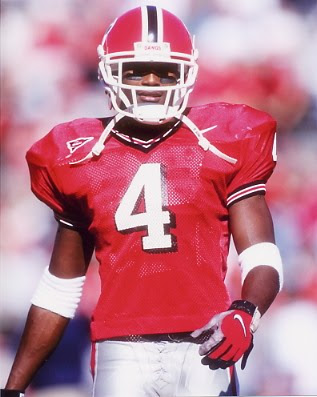 Hailing from as far down in South Georgia as is possible, Folkston, GA native Champ Bailey is often regarded as one of the greatest multi-position players ever to play college football.

Bailey came to Georgia as one of the nation’s most sought after recruits, and a member of one of Georgia’s now famous family heritages (with two brothers and a cousin that have played at UGA).

Bailey’s name is not plastered all over the record books at UGA, but that’s because he didn’t play just one position like a normal player, he played on every front: offense, defense, and special teams. Bailey was not dominant in one position; he was dominant in them all.

While only starting two games his freshman year, Bailey amassed 47 tackles (35 of them solo) with 2 interceptions. Starting his sophomore year, Bailey would become the feared triple threat player that turned him into a legend. His junior season was one of infamy, where he would play over 1,000 plays and over 100 in 7 different games. 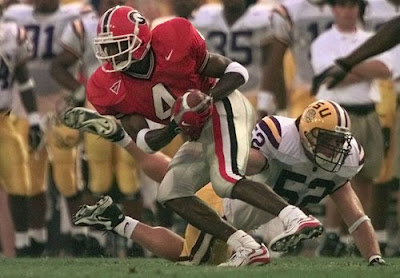 Bailey would be named a consensus All-American that year by attaining 52 tackles, three interceptions,744 receiving yards, five TDs, 261 kickoff return yards, and 49 punt return yards. Bailey had near identical defensive stats during his sophomore and junior season, but his increased performance on offense and special teams made him a terror to the opposing teams every time he stepped on the field.

Bailey would top his junior season (1998) off by receiving the Bronco Nagurski Award, given to the best defensive player in college football, and helping lead Georgia to a 35-33 victory over Virginia in the Peach Bowl by catching three passes for 73 yards, catching a 14-yard touchdown, and returning five kickoffs for 104 yards.

Bailey would leave Georgia after the 1998 season, and would be taken 7th in the 1st round by the Washington Redskins. Bailey has continued his dominating ways playing cornerback in the NFL playing for both the Redskins and Broncos, where he’s amassed 621 tackles and 46 interceptions, and become a 9 time pro bowl selection in only 11 seasons.

Here’s a clip of an interception and 99 yard return by Bailey against Tom Brady and the Patriots. Ironically enough, fellow Dawg Ben Watson would be the one to tackle Bailey on the 1 yard line, depriving him of a 100 yard TD interception.
Posted by BulldawgJosh at 1:06 PM

Bailey looks like he slowed down at﻿ the end of his run. Checkout Amanda