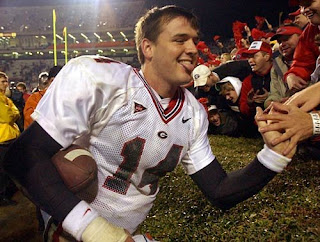 David Greene’s father was an Auburn graduate and his sister was a student at Auburn, so naturally David Greene wanted to become a tiger (or War Eagle or whatever). But in the fall of 1999, Auburn had its eyes set on Jason Campbell and did not offer Greene a scholarship. During his senior year at South Gwinnett High School, he earned numerous honors including Gwinnett County Player of the Year, Atlanta Touchdown Club quarterback of the Year, and first team all-state and chose to attend The University of Georgia over Georgia Tech to play college football. Five years later, Greene would leave as the winningest quarterback in NCAA history.
After redshirting the 2000 season, Greene was in a competition with returning quarterback Cory Phillips for Georgia’s starting quarterback job in 2001. After both played poorly in the G-Day game that spring, many suspected that new coach Mark Richt may turn to freshman phenom DJ Shockley to take the reins at quarterback. But as the season neared, Greene won the starting job and the decision to redshirt Shockley was made. Greene played well in his first three games as starter but it was Georgia’s week 4 matchup at top ranked Tennessee that supplant his position as quarterback for the Dawgs. Playing on the road before over 100,000 fans, Greene looked calm in cool throwing for over three hundred yards and two touchdowns. His poise was key in the final drive that gave Georgia the victory:


Greene was named SEC Player of the Week and would continue a solid freshman season. He was SEC Offensive Rookie of the year, throwing for 2,789 yards and 17 touchdowns.
In 2002, Greene would continue his success as the starter, leading Georgia to its first SEC Championship in 20 years. He made arguably the biggest play in Georgia history since Herschel Walker left Georgia in the November game at Auburn. With the Dawgs trailing late in the fourth and facing a long fourth down, Greene lofted a pass towards the back of the Auburn endzone. Michael Johnson was there to make the catch and clinch the SEC East:


During that SEC Championship game a few weeks later, Greene was outstanding, throwing for 237 yards and a touchdown while being named the game MVP. He was a member of the first team All-SEC squad and was honored as the SEC Offensive Player of the Year.


While Georgia would return to the SEC Championship game the next season, Greene struggled behind a young offensive line that gave up the most sacks in the SEC. While throwing for a career high 3,307 yards, he only threw 13 touchdowns and had a career high 11 interceptions.

After Greene and All-American defensive end David Pollack both decided to return for their senior seasons, there were high expectations for Georgia in 2004. The Dawgs got off to a strong start, including a blowout victory over LSU in Athens. During that game, Greene tied a school record throwing 5 touchdown passes. But the Dawgs were upset by Tennessee the following week, ending the dream of a perfect season. Against the Gators in Jacksonville, Greene had his best game against Florida. He completed 15 of 23 passes for 253 and three scores as Georgia earned the first victory over the Gators in the Mark Richt era. During his final home game against Tech, he broke his thumb on a touchdown pass early in the game. After DJ Shockley struggled and Georgia Tech mounted a comeback, Green re-entered the game in the fourth quarter to lead the Dawgs to a field goal. Georgia held on for the win, sealed when Reggie Ball forgot how to count to 4. For the season, he was named a second team All-SEC quarterback, throwing for 2508 yards, 20 touchdowns, and only 4 interceptions.

David Greene graduated Georgia with most wins for any starting quarterback in NCAA history (42-10 overall record, later broken by Colt McCoy in 2009). For his career, he completed 849 of 1,440 passes for 11,528 yards and 72 touchdowns. He is both the Georgia and SEC record holder in career passing yards (11,528) and total offense (11,270). He set the SEC record for consecutive passing attempts without an interception (214) and started an NCAA record 52 consecutive games (also later broken by Colt McCoy). Greene was drafted by the Seattle Seahawks in the 2005 NFL Draft, but never saw action during a 4 year career. He now co-owns an insurance brokerage firm with fellow Dawg Matt Stinchcomb, is one of the host of the Annual Countdown to Kickoff, and can be heard doing post game for Georgia on the radio.
Posted by Streit at 8:00 AM

I would've gone with Knowshon just ahead of DG but tomatoes, tomatos. Have really enoyed the list!