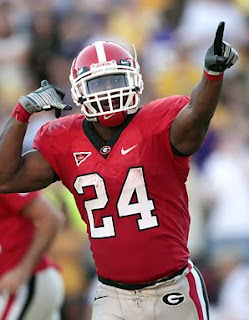 In 2006, running back Knowshon Moreno arrived in Athens after a record setting high school career in the state of New Jersey. And while his talents were clear to the Georgia coaching stuff, Coach Richt came to a tough decision when he decided to redshirt Moreno for the 2006 season. Georgia had three experienced running backs (Danny Ware, Kregg Lumpkin, and Thomas Brown) who were all juniors and since it looked as though carries would be tough to get. When Knowshon finally saw the field in 2007, he immediately showed flashes of the player the Georgia coaches has been talking about for a year while he sat out. It is a decision that Coach Richt still wishes he could reverse.

After all of the hype, Georgia fans were anxious to finally see Moreno take the field for the Dawgs. In the 35-14 season opening victory, showed his skills on this play:

The following week against South Carolina, Georgia fell 16-12 but Knowshon carried the ball 14 times for 104 yards, his first career 100 yard performance. After solid games against Western Carolina (including his first touchdown), Alabama, and Ole Miss, he racked up 157 yards rushing against Vanderbilt in his first start. With Thomas Brown and Kregg Lumpkin out with injury, Knowshon was lone scholarship back for Georgia as they headed to Jacksonville to take on the defending national champion Gators. Knowshon would have the second of 5 consecutive 100 yards performances, rushing for 188 yards and three touchdowns as the Dawgs “danced” their way to victory. After big games against Troy, Auburn, and Kentucky, Moreno was hampered with an ankle injury against Georgia Tech. He recovered for the Sugar Bowl victory over Hawaii, rushing for 61 yards and two touchdowns on only 9 carries. For the season, 1,334 yards and 14 touchdowns and added 253 yards on 20 catches receiving. Here is a look back at his highlights from the 2007 season:

After Georgia finished the 2007 season #2 in the national rankings, there were high expectations for Georgia in 2008. Knowshon and Matt Stafford led a high powered offense that was ranked #1 in the preseason. He scored 6 touchdowns on his first 26 carries of the 2008 season, including the most amazing play I have ever seen in person:

While Georgia failed to live up to the preseason expectations, Knowshon continued to play fantastic. Highlights included a 161 yard performance in the victory at LSU and 131 yard performance against Auburn that included his first career touchdown reception. He capped his redshirt sophomore season with a touchdown reception from Matt Stafford that helped seal Georgia’s victory over Michigan State in the Capital One Bowl. For the year, he rushed for 1,400 yards on 250 carries (5.6 yards per carry) and 16 touchdowns and also caught 33 passes for 392 yards and two scores. He was named to the All-SEC first team and an All-American by the AFCA Coaches.
A month after the Capital One Bowl, Knowshon Moreno (along with Matt Stafford) declared early for the NFL Draft, ending a brief but brilliant career. He holds the 5th and 6th highest single season rushing totals in Georgia history, fourth in total rushing yards (2,734) and fifth in rushing touchdowns. Many consider him the most talented offense player at Georgia since Herschel Walker. He was drafted in the first round of the 2009 NFL draft by the Denver Broncos and had a successful rookie season, rushing for over 900 yards and 7 touchdowns.
Posted by Streit at 8:00 AM

I remember this game, and when they said he was a redshirt﻿ freshman, I was like "Get him outta there, put Brown in, he doesn't know how to run the ball". Boy was I wrong. amanda vanderpool model