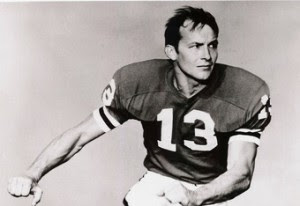 Miami Dolphins defensive lineman Manny Fernandez once said that nobody asked Jake Scott to sing his college fight song like other rookies in his first training camp because "he's the one guy no one messed with."

Living in Hawaii today, the unique former Georgia defensive back is a hard man to reach. But legend has it that he once drove his motorcycle up and over Stegeman Coliseum.

The 1968 team, referenced in the Bill Stanfill post, wanted to go to the Orange Bowl and Jake Scott represented the players in their plea to Coach Dooley. However, Dooley had already accepted a bid to the Sugar Bowl, beginning Scott's disassociation with UGA. A disassociation that lasted nearly 40 years. 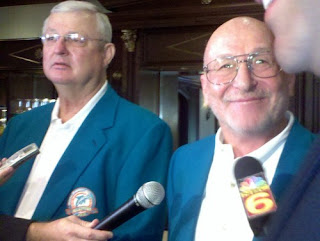 Scott left UGA early for the CFL in 1969 before joining the Miami Dolphins in 1970 and reuniting with Bill Stanfill. He recorded 49 interceptions in his career, still a Dolphins record today. Scott was the MVP of Super Bowl VII to cap off Miami's undefeated season.

In 2001, Dooley lobbied for Scott to be inducted into the College Football Hall of Fame with one condition - that he show up for the ceremony, something he didn't do when awarded as the 1968 SEC Player of the Year. It was relayed back through Stanfill that he wouldn't show up in 2001 either.

Scott finally reunited with UGA before the 2006 Georgia Tech game where he was honored in the pregame.

Like the Stanfill post, we've included a recent article on Scott. This is an excerpt from the Sun Sentinel in May. 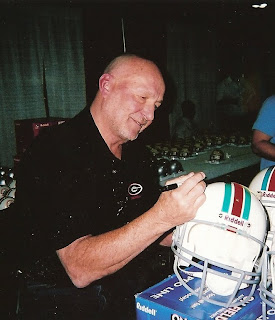 You have to see Shula in the 1970s. He'd practice four times a day, led his coaches in calisthentics so they'd teach players properly, once chased after a referee who told him to relax over a 5-yard preseason penalty — "Five yards is my life!" Shula yelled — and was, in one word, his word, "obsessed." How do you think he won so much?

You have to see Scott, too. He's the most unique of those Dolphins. A person so loyal that, later in life, he would travel halfway around the world to see a college teammate on his deathbed. A player so feared even as a rookie that veterans didn't ask him to sing his college fight song in training camp like the other rookies.

And tough? Forget his Most Valuable Player award of that Perfect Season's Super Bowl. Scott played the first Super Bowl of that era, the loss to Dallas, with two broken wrists. They were put in casts after the game. He joked that when he went to the bathroom, "I find out who my true friends are."

These unbendable personas collided in the 1976 preseason. A team doctor didn't think Scott's shoulder was as hurt as badly as Scott said. A shot was ordered to numb the shoulder. Scott balked. Shula backed the doctor.

Scott was livid. Hadn't he proved his toughness through the years? Now he was ordered to take a needle to mask a bad shoulder? For some preseason game?

Their relationship had deteriorated over the previous couple of years. Once, the Shula family had spent an offseason day with Scott at his mountain home in Vail, Co. And David Shula wore No. 13 in Scott's honor through high school and college.

But this 1976 preseason moment opened their relationship like a wound. They began yelling in the locker room. What was said isn't as important as what happened the next day, when Scott was traded to Washington for peanuts.

If Scott could love deeply — and his teammates still felt it through the ensuing years — he could hate deeply, too. He tried to make things right with Shula at the 1982 reunion of the Perfect Season. Shula, he says, cursed him in an elevator. Shula doesn't remember it. But that was that.

Through all these years of the '72 reunions and banquets and good times, Scott stayed away. He didn't need the public cheers. He met teammates on his own.

He created a dream life on the island of Kauai, fishing, golfing and having a drink with friends. He still lives that way.

"Taking the boat out this afternoon,'' he said Friday.

But if there's a benefit of age, it's perspective in what matters most. Shula and Scott have lost friends and family. They've had personal ups and downs. Their faces have loosened and some hard opinions have, too.

"There's no sense to have a grudge with Shula,'' Scott says.

"It's silly we haven't seen each other all this time," Shula says. "The big thing was I got to say how I felt about him, how much he's always meant to me."

For years, '72 teammates have wondered how to make peace between them. Turns out they did fine on their own. At one point as they talked that day, Shula said, "You and Dick [Anderson] were the best safety combination ever in football."

"I wish you'd said that when I was negotiating my contract,'' Scott said.

They laughed at that, a good laugh on a good day to remember. And to forget. A wall tumbled down. And in its place, finally, thankfully, came laughter.