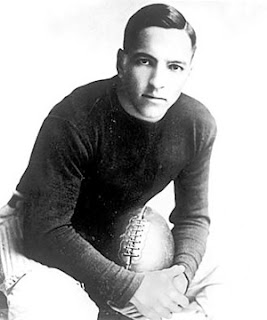 When you say “Georgia Football”, the first thing that comes to most peoples’ minds is Herschel Walker and Vince Dooley. But prior Dooley’s arrival in Athens, another name was synonymous with Georgia football: Bob McWhorter. During the infancy of the sport at the university, Georgia was typically known more for its coaches, such as Glenn “Pop” Warner and George “Kid” Woodruff. But a 5’10’’ kid from nearby Lexington would give the Georgia program its first big star and one of the greatest players in school history.


The 1909 season had not been a successful one for the red and black squad from Georgia. They had won just one game and scored only two touchdowns in 7 games. But new Georgia coach Alex Cunningham brought a new direction to the Georgia team, as well as its future star player. Cunningham had been the baseball coach at Gordon Military College and Bob McWhorter was his centerfielder. In 1909, they played a game in Athens against Georgia, beating them 11-0. The next day, Cunningham was hired to coach the Georgia baseball and football teams, Bob McWhorter soon followed.


Bob McWhorter debuted for Georgia at halfback against Locus Grove College. Georgia would destroy the team from Locus Grove, 101-0, and it was the freshman McWhorter doing much of the scoring. McWhorter rushed for 5 touchdowns in the game. He also played the entire game on defense, a trend that would continue over the next 4 years. At the end of the season, McWhorter was instrumental in helping Georgia break a 5 year drought against Georgia Tech. He scored a 45 yard touchdown late in the game to give Georgia the lead and the eventual victory. He finished the season with 20 touchdowns and Georgia finished with a record of 6-2-1.


McWhorter continued to have success the following season as a sophomore. Playing the entire game on both offense and defense, McWhorter was the leader of a Georgia team that would only lose 1 game all season. He finished with 15 touchdowns in his sophomore year. Another successful season for Georgia in 1912 (6-1-1) was highlighted by an upset over a heavily-favored Auburn squad. McWhorter made two key plays to help ensure the Georgia victory. On their opening drive, Georgia lost nearly 40 yards on its first three plays from scrimmage. McWhorter lined up to punt, but instead took off down the field, going all the way for a touchdown. Later in the game with the score tied at 6, McWhorter threw a long touchdown pass to Hugh Conklin to give Georgia the win.


By 1913, McWhorter’s name was finally becoming known outside of the South. At the time, northern writers typically ignored players from the south when writing about college football, but that changed with McWhorter. The season began with 108-0 victory over Alabama Presbyterian and McWhorter had one of the most dominating performances in Georgia history. He had six runs of over 50 yards (meaning had over 300 yards rushing) and scored six touchdowns. The Bulldog captain continued to play great throughout the remainder of the season, including two touchdowns (one rushing and one on a punt return) in his final home game, a 19-6 victory over North Carolina. For the season, he scored 14 touchdowns and became the first Georgia player to be named an All-American. One New York writer had this to say about McWhorter: ''To Northern enthusiasts, McWhorter comes as a stranger, but not so in the South, where he is known as the most phenomenal backfield player the game has known for years.''

''To Northern enthusiasts, McWhorter comes as a stranger, but not so in the South, where he is known as the most phenomenal backfield player the game has known for years.''
While statistics from that era may be incomplete, Georgia records indicate that McWhorter scored a total 61 touchdowns during his four years for Georgia. That would rank him first all-time at Georgia (ahead of Herschel Walker’s 52). He was a four-time All-Southern Conference team member and was also a star for the Georgia baseball team. He turned down offers to play professionally, instead enrolling in graduate school at Virginia. During his time at Virginia, the Cavaliers traveled to Boston to take on national powerhouse Harvard. A running back named Bob White played halfback much of the game for Virginia and was the best player on the field that day. McWhorter returned to Georgia as a law professor at the University from 1923 until 1958. He served four terms as the mayor of Athens and the university named a dorm in his honor. He was inducted into the College Football Hall of Fame in 1954, the State of Georgia Sports Hall of Fame in 1964, and the UGA Circle of Honor in 1996.
Posted by Streit at 9:45 AM