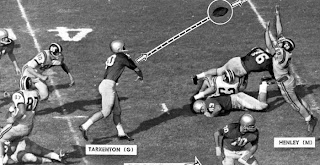 By the 1950’s, there had been a number of players who grew up in the Athens area that had found some success at The University of Georgia. But the expectations of those players was usually less because people did not think players from the Athens area got a fair chance from the Georgia coaches. Fran Tarkenton was born in the Washington area and moved to Athens when his father got a preaching job in Athens. He played for Weyman Sellers at Athens High School, leading them to a state championship over state-powerhouse Valdosta. When he began his career at Georgia, he set out to change the theory that Athens players couldn’t star at Georgia. A theory Tarketon wrote about in his autobiography saying, “It was the kind of theory that had something in common with many theories: it was really hard to prove, and it was probably filled with gas.”
After playing for the freshman team in 1957, Tarkenton sat third on the depth chart in his sophomore season behind Charlie Britt and Tommy Lewis. In the season opener against Texas, Georgia was trailing in the fourth quarter, failing to score all game. Tarkenton convinced Coach Butts to put him in and he promptly led Georgia on a 95 yards scoring drive that ended with a Tarkenton touchdown pass and 2 point conversion. Texas scored again to take the lead, but Butts sent Charlie Britt back out to quarterback the next series and Georgia lost. There was an uproar in Athens following the game, and Tarkenton took over as starter. But Butts substituted Britt early in the next game, and Georgia once again lost. But Tarketnon continued to play sparingly. He almost left Athens (for Florida State), but Quinton Lumpkin helped talk Fran into staying.
From then on, Fran Tarkenton played a lot of quarterback at Georgia. Charlie Britt was still at Georgia, but began to spend a larger portion of his time on the defensive side of the ball. In 1959, he completed 62 of 102 passing attempts for 736 yards and 6 touchdowns. None was more important than the touchdown pass he threw late in the fourth quarter against Auburn. The winner of the game would be the SEC Champion and head to the Orange Bowl and Georgia was trailing 13-7 with just 30 seconds to go. From the Auburn 13, Tarkenton found a wide open Bill Herron for the game winning touchdown.

Georgia would go on to be Missouri 14-0 in the Orange Bowl. He was the full time starter in 1960, throwing for 1,189 yards and seven touchdowns. He was the SEC leader in total offense with 1,274 yards and was named first team All-SEC and named an All-American by the Associated Press.
Fran Tarkenton was drafted in the third round of the 1961 NFL Draft by the Minnesota Vikings. He would become one of the greatest quarterbacks in NFL history. He led the Minnesota Vikings to three Super Bowls and retired as the NFL’s all-time leading passer. He threw for 47,003 yards and 342 touchdowns (both records have since been broken by Dan Marino and Brett Favre). He was inducted into both the College and Pro Football Hall of Fame. Here’s a look at his NFL career:
Posted by Streit at 2:23 PM

@SarahDownSouth tweeted this the other day:

"There is no place in the world precisely like the grass that grows between the hedges in Athens, Georgia." - Fran Tarkenton

PS-are y'all gonna have a regular season pick 'em this year? Hope so!

JUST WANTED TO THANK YOU GUYS FOR ALL THE GA HISTORY YOU GIVE US.
ONELOVE GA