Evidently LSU is taking the Ivy League by storm.
Andrew Hatch, the one-time LSU QB, who competed on and off during the 2008 season with Jarrett Lee for the starting spot, is now in competition for the starting QB role with the Harvard Crimson.
Even though Hatch started his collegiate career at Harvard in 2005, went on his 2-year Mormon mission trip, transferred to LSU when offered a spot with the Tigers by the former BYU HC/LSU OC, and transferred back to Harvard after breaking his fibula in LSU's 2008 loss to UGA, he still is only an academic junior, due to Harvard not accepting any LSU transfer credits. 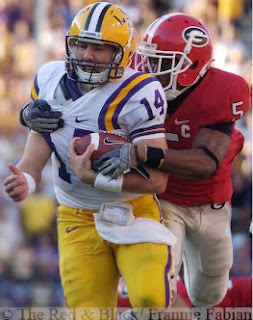 Apparently Hatch couldn't run fast enough.
And evidently he still has a lot to learn on the gridiron too, according to Harvard coach Tim Murphy:

Murphy said he could tell that playing for LSU, which is in college football’s elite division, made Hatch a better player, although he still had some soft spots in his game.

“He needs to work on taking care of the football better, and he’s got to do a better job in his decision making,” Murphy said. “Part of that is becoming more comfortable with our offense, which is a little more complex than the offense he ran at LSU.”

Sort of makes you wonder what Les is up to down on the bayou...