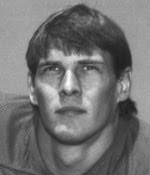 "The best defensive player I've ever coached and maybe the best one I've ever seen," is what Vince Dooley said about Terry Hoage at an Academic All-America Hall of Fame induction. Such is fitting for a superior athlete that dominated on the field, in the class room (graduating with a 3.85 GPA), and helped Georgia dominate college football in the early 1980s.

Hoage came to the Georgia Bulldogs from Huntsville, Texas and as a freshman he was responsible for a blocked field goal in the 1981 Sugar Bowl that secured the 1980 National Championship for the Bulldogs.


Go to the 38 second mark in this video to see Hoage's blocked FG
His next three seasons saw him perform at a legendary level, as he helped guide the Bulldogs (as one of the team’s essential playmakers), in an era of Georgia football that would claim a national championship, three SEC championships, and go 43-4-1. In that time, Hoage would display his talents through such achievements as claiming the SEC record for interceptions in a season with 12 during the 1982 season, and finishing his career 3rd all time at Georgia in career interceptions.

Hoage’s college career was filled with a plethora of honors and accolades: Two time consensus All-American, two time Academic All-American, two time SEC Defensive Player of the Year, 1984 SEC Athlete of the Year Award, and also being awarded the 1984 Top V Award that is given to the country’s top student athletes. Hoage also finished 5th in the balloting for the 1983 Heisman Trophy, gaining more votes than any other defensive back had ever received up to that time.

Hoage would go on to be drafted in the 3rd round of the 1984 NFL Draft by the New Orleans Saints. Hoage’s professional career would last 13 seasons, where he would play for 6 teams and win a Super Bowl Championship with the 1991 Washington Redskins.

Hoage currently lives in California where he and his wife operate Terry Hoage Vineyards. As is typical with Hoage’s football career, Wine Spectator Magazine named the Hoage’s the Top New California Wine Producers for 2008. 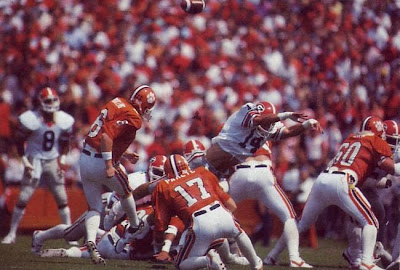 Posted by BulldawgJosh at 12:22 PM