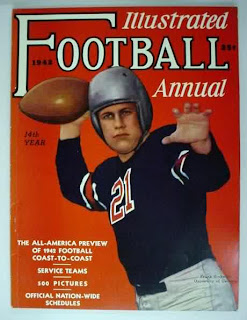 The first Heisman Trophy winner in Georgia's history was a 5-foot-10-inch halfback from Youngstown, Ohio by way of Croatia that, strangely enough, Bulldog recruiter Bill Hartman got a lead on from a gas station attendant in the Buckeye state.

Hartman was in Ohio to recruit the state's best back but quickly learned he was planning to play for Ohio State. That's when a gas station attendant intervened, telling Hartman that the best back in Ohio wasn't that kid going to Ohio State, but a young man that lived right down the street from that gas station.

Hartman paid a visit to the Sinkwich household, and the rest as they say is history.

George Poschner, a friend of Sinkwich's from Ohio, followed him to Georgia and both played on the 1939 freshman team. The "point-a-minute Bullpups" went undefeated, and the Georgia faithful couldn't wait for those freshmen to join the varsity team.

In Sinkwich's junior year of 1941, he led the nation in rushing with 1,103 yards on 209 carries. But it was his senior in which Frank brought home almost every trophy in the land. In 1942, he set an NCAA single-season record for total offense with 2,187 yards. He was named as an All-American for the second time in his career and led the Bulldogs to a Rose Bowl victory over UCLA as Georgia captured the National Championship. 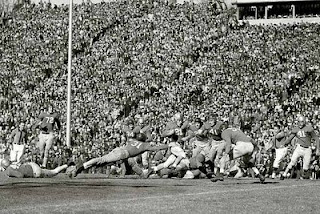 The 1942 Heisman winner was voted the top athlete in the country by the Associated Press over Ted Williams of the Boston Red Sox, a year in which Williams hit for baseball's triple crown.

In his three-year varsity career, Sinkwich rushed for 2,271 yards, passed for 2,331 yards and accounted for 60 touchdowns - 30 rushing and 30 passing.

After graduating from UGA in 1943, Sinkwich joined the United States Marines, where he received a medical discharge due to his flat feet. He soon joined the Detroit Lions and was named NFL MVP in 1944.

The College Football Hall of Fame inducted him in 1954. Sinkwich's number 21 is only one of four numbers to be retired by UGA.
Posted by Earl at 9:27 AM