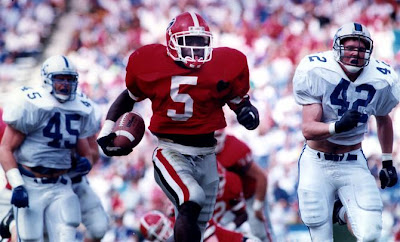 Garrison Hearst is a well noted Georgia Bulldog, but the high achieving level he attained at Georgia is often underappreciated. The Lincolnton, GA native is the #2 career rusher for the bulldogs, was a dominating, powerhouse back in the early 1990’s, and his name is emblazoned all over Georgia’s record books.

Hearst came to Georgia in 1990, and would become a leading force on the field in the SEC. Hearst would only start just over half the games his freshman and sophomore seasons, but would garner respectable numbers during both years. He would be the leading rusher for Georgia all three years he played, and was also the leading scorer on the team for the ’91 and ’92 seasons.

clip of Hearst's 50+ yard TD run in 1992 versus Ole Miss*
His junior season in 1992 was of near epic proportions. Georgia would win 10 games (with 2 close losses), and finish the season ranked #8, topped off by a Citrus Bowl victory over the Doormat of the SEC (commonly referred to as Ohio State).

Highlights of Hearst from the 1993 Citrus Bowl versus Ohio State*
Hearst would gain 1,547 rushing yards that season, and a total of 1,910 all purpose yards (placing him second in school and SEC history), as well as being the only other rusher besides Herschel to gain 1,500 yards in a season. Hearst would also set the SEC record for touchdowns in a season (21), rushing touchdowns in season (19), average gain per rush (6.8), and most points scored in a season (126). His rushing TD and average gain records still remain SEC records today.

Hearst’s national notoriety skyrocketed as he won the Doak Walker Award (given to the nation’s top running back), was voted a consensus All-American, and finished 3rd in the Heisman balloting (finishing behind Gino Torretta and Marshall Faulk).

Hearst would go on to be the 3rd overall pick in the 1993 NFL Draft by the Arizona Cardinals. While sustaining injuries and health problems that limited his playing, Hearst played for 12 seasons, appeared in 2 Pro Bowls, and twice won NFL Comeback Player of the Year. 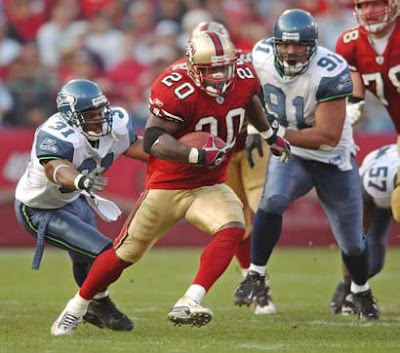 I love how tired the KY defensive player looks in that first pic, running after Hearst.