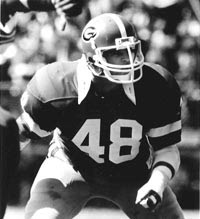 Like many Dawgs before him, Knox Culpepper will enter the Georgia-Florida Hall of Fame this year. For his career, Culpepper finished with 383 tackles, ranking sixth on Georgia's all-time list. But most importantly, he finished 3-1 against the Gators.

Culpepper remembers "the smell of liquor coming from the stands as we ran onto the field [in Jacksonville]. There was no atmosphere quite like it."
The early '80s linebacker followed in his father's footsteps, who played linebacker for Wally Butts' Dawgs in the '50s and was team captain in 1956. He also accepted the challenge of wearing linebacker Frank Ros' number, the senior captain of the 1980 National Championship team.
An All-State linebacker from The Lovett School, Culpepper was a second-team All-American, an All-SEC performer and the team captain himself by his senior season with the Dawgs in 1984. He set the Georgia record for total tackles in one season with 170 in his junior year of 1983, a record still held today.
What did he do for an encore? Only 166 total tackles in 1984, still good for second on the single season list. He earned the Coffee County Hustle Award both seasons.
Culpepper also still ranks #1 and #2 on Georgia's single game tackles list. In 1983, he racked up 25 tackles versus Auburn in a 13-7 loss, breaking the school's record. However, that record only stood through the bye week as Culpepper marked up 26 tackles against the NATS in a 27-24 win.

In "What It Means to be a Bulldog," Culpepper references the "immortal" words of Lewis Grizzard, who wrote that "The game of life is a lot like football. You have to tackle your problems, block your fears, and score your points when you get the opportunity."
Posted by Earl at 7:00 AM

Great post! Knox was one of my favorites back in the day because my Dad taught one of his classes and always told me what a great guy he was.

Knox is one of the great "Lineage Dawgs." The Culpeppers, the Butlers, the Tereshinskis, the Kasays, the Paynes...Who am I forgetting?