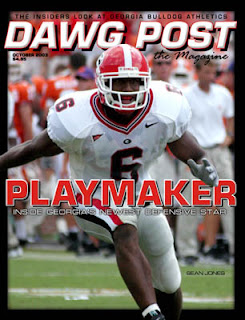 Sean Jones accounted for 42 touchdowns playing quarterback for Westlake High School in 1999. He also played defensive end and committed to Georgia and Coach Jim Donnan. Jones red shirted during his freshman year in 2000 and instead found a home on the defensive side of the football. In 2001, Jones played in all 12 games as a back-up free safety. He made 38 tackles and had 2 pass breakups and returned in 2002 as a starter.

In 2002, Sean Jones’ play as both a safety and a punt returner helped lead Georgia to a 13-1 record and an SEC Championship. Starting in 12 of 14 games, he made his first fantastic play of the season against Northwestern State by blocking a punt that was returned for a touchdown. His best game of the season came in the most important Georgia game in 20 years. Georgia traveled to Auburn with a chance to clinch the SEC East title. While most people remember how this game finished, few forget that without Sean Jones, Georgia would have never been in position to win. On Auburn’s opening drive of the game, Jones intercepted a pass deep in Georgia territory that kept them off the score board. Later in the game, he grabbed another interception and recovered a fumble. And with the Dawgs down late in the 4th, Jones had a big punt return to set up Georgia’s game winning drive(his 16 yards per punt return in 2002 ranks 8th all-time at Georgia). He finished the season with 83 tackles.

During his junior (and final) season in 2003, Jones moved from free safety to strong safety. Playing against Tennessee in Knoxville, Jones made one of the biggest momentum changing plays I have ever seen in college football:


He continued to make fantastic plays throughout the year, including tying the Georgia record for field goal blocks with 3. He led the team with 5 interceptions, a sack, 5 pass break ups, and finished second on the team with 121 tackles. He was named to the All-SEC first team and a consensus All-American.

Sean Jones finished his career at Georgia with 250 tackles, 10 tackles for a loss, 1 sack, 3 fumble recoveries, 7 interceptions, and 4 blocked kicks. He was drafted in the second round of the 2004 NFL Draft by the Cleveland Browns and currently plays for the Tampa Bay Buccaneers.
Posted by Streit at 1:13 PM

I love this clip, still remember where I was when it happened, take that going into halftime. Amanda Vanderpool