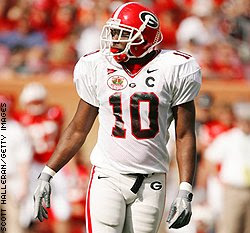 During my time at The University of Georgia I had the pleasure of watching one of the hardest hitting players in Georgia history bring the pain against SEC defenses. That player was Thomas Davis, who was originally not offered a scholarship to come to Georgia and play football. But when a member of the Georgia coaching staff saw Davis playing basketball, they knew his athleticism would translate onto the gridiron. The native of tiny Shellman, Georgia, will be remembered as one of the key players of the mid-2000s teams that brought the SEC Championship back to Athens.

Davis redshirted during 2001, spending time at both linebacker and safety. During the Dawgs run to the SEC Championship in 2002, Davis moved up the depth chart and ended up starting four games that year. 2003 would be a breakout season for him and he helped lead Georgia back to the SEC Championship for the second straight year. He was named to the All-SEC squad as he totaled 130 tackles.

During his junior season in 2004, played a major role in the another ten win season for the Dawgs under Mark Richt. One of his signature plays was a huge tackle against LSU’s Jacob Hester. Hester, then a freshman, fumbled on the play. He would not fumble another ball for nearly four years. Despite missing the Kentucky game with an injured knee, he once again led the Dawgs in tackles with 81. He also 5 tackles for a loss, three sacks, and an interception. Here are a look at some of Davis’ career highlights:


Davis left school with one year of eligibility remaining following the 2004 season. For his Georgia career, he made 29 starts in 35 games played. He totaled 272 tackles, 10.5 sacks, and 3 interceptions. He was drafted 14th overall in the first round of the 2005 NFL draft by the Carolina Panthers and has developed into an All-pro player. He will miss the 2010 season after suffering a torn ACL in spring practice.
Posted by Streit at 8:58 AM

One of absolute favorite Dogs of ALL time. Junkyard dog down to the bone.