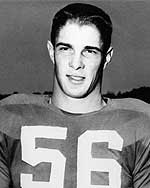 During a time most of the offense in college football took place on the ground, Harry Babcock became a star catching passes for Coach Wally Butts. The 6’2’’ Babcock came to Athens from Ocala, Florida, where he played mostly guard. But as a member of Georgia’s freshman squad in 1949, he switched to the end position (similar to the modern wide receiver) where he would become a force in the SEC. Georgia completed only 61 passes during the 1950 season, but Babcock was the recipient of 8 of those passes.
1951 would mark a change in the Georgia offensive philosophy with the arrival of quarterback Zeke Bratkowski. Bratkowski would become one the greatest quarterbacks in SEC history and Babcock was on the receiving end of a lot of Zeke’s throws. Babcock led the SEC in receiving that year, finishing with 41 catches for 666 yards. His signature performance came in the Georgia 35-28 victory over Boston College when he caught long touchdown passes (76 and 54 yards). He was named to the All-SEC first team by the Associated Press.
During his senior season in 1952, injuries sustained in a car crash would hamper him throughout the year but he still managed to put together a fine campaign that would earn him All-SEC and All-American honors. He had 8 catches for 106 yards against Alabama and caught two touchdowns in a win over Pittsburgh. Despite being injured much of the season, his importance to the team was never more prevalent than against Florida. Gator linebacker Arlen Jumper took a cheap shot at Babcock early in the game and Babcock retaliated. Both players were kicked out of the game. Without Babcock on the field, heavily favored Georgia struggled on offense and ultimately lost the game. He finished with 3 touchdowns and 456 yards on 31 receptions, second in the SEC behind teammate Johnny Carson.
Harry Babcock ended his career as Georgia’s all-time leading receiver. He caught 80 passes for 1,199 yards (still good for 16th all-time today). He became the second Georgia player, after Charley Trippi, to be selected #1 overall in the NFL when he was drafted by the San Francisco 49ers in 1953. Injuries hampered much of his NFL career and he was out of the NFL just a few years later. The player that Coach Wally Butts once said was “the finest all-around end I have seen in my 15 years in the league” was inducted into the Georgia Sports Hall of Fame in 1992.
Posted by Streit at 6:30 AM