John Isner has been in the news a lot since his record setting match at Wimbeldon last month. Yesterday, he competed in the final of the Atlanta Tennis Championship as he took on fellow American Mardy Fish. In the nearly 100 degree weather (I was told the court temperature was measured at near 150), both players fought hard with fish finally winning in a tie breaker after the third set. Each player was only broken twice, but it was apparent that the heat was getting to the 6'9'' Isner more than it was Fish.


The tournament took place at the Atlanta Athletic Club, which my wife's boss just happens to be a member of. He purchased multiple tables for the championship (his son was serving as one of the ball boys as well) so we got to sit in the second row of the VIP section. while sitting close to the court was great, the best part of the VIP section is the free beer, water, and soda that is brought directly to your seat. The heat would have been unbearable without the 5 liters of water I went through.

Here are my pictures from the event:

Our seats on the second row 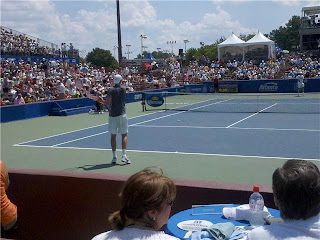 The insane amount of water we drank to beat the heat 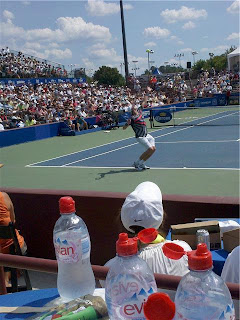 Isner gets ready to serve 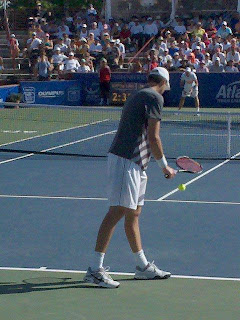 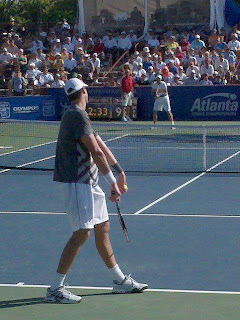 This one clocked in at 129 miles per hour. 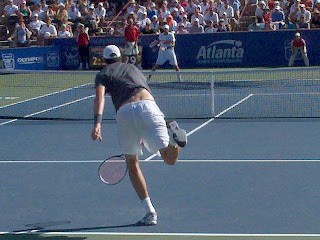 Streit, was that you in the visor the camera's kept panning to?

Nope. I had on a red Georgia hat. If you saw where the camera was, i was just above it.

As Bernie said yesterday-with all due respect for Isner's Coach, i think he made a bad call not pulling Isner from the Doubles Match the night before. If he'd had a little more rest like Fish, he'd be the one holding the trophy today. After he lost the 2nd set it was just hard to watch-he was clearly exhausted & hurting out there. I would've been dead before the end of the 1st set. That heat was merciless.

So proud of Isner though, always a tough competitor, a class act & loves UGA like no other.

Thanks for sharing the pics Streit!