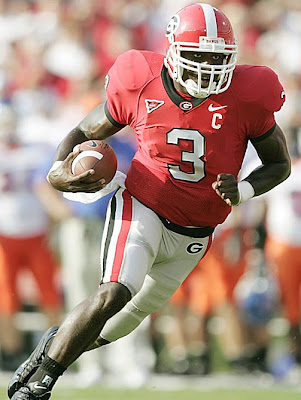 Often regarded as Mark Richt's first recruit after he became the head coach at Georgia, DJ Shockley was a nationally recognized and all state quarterback coming out of Clayton County, Georgia who would become the unselfish hero of the Bulldawg Nation.
I could regale you the typical biography of stats and accolades that proves his worthiness as one of the greatest to ever don the Red and Black, but that would be too typical for a player that won over the hearts of Dawgs everywhere.
Think back to before the season in 2005. Shockley had never started a game, the man in front of him spent the last 4 seasons becoming the all-time winningest quarterback in NCAA history, he was inserted into games with fans cheering his presence if there was a touchdown, yelling and booing if an interception came about and with his natural talent on display when he did play, the thought of transferring weighed heavily on his mind.
Instead, Shockley decided to stay at Georgia, and face that his entire college career would culminate into starting only one season. Before the 2005 season began, most wondered how things would play out with him starting for the first time.
On that squelching September afternoon in 2005 against up and comer Boise State, the redshirt senior blew away all doubts with a 300+ yard, 6 TD performance (5 passing, 1 rushing) that earned him national player of the week honors.
My fav clips are Leonard Pope's catch at 1:55, and Sean
Bailey's catch at 4:21
For the rest of 2005, Shockley was a machine that seemed unstoppable. Amassing a 7-0 record through some close games and dominating performances, Shockley's name became synonymous with the other two major college football stars of 2005: Reggie Bush and Vince Young.
An injury against Arkansas forced him to miss the following week's game against Florida, a bitter loss that was followed by a last minute 31-30 loss to Auburn where Shockley gave an inspiring performance, and had brought Georgia the lead within the last few minutes.
After leading the Bulldawgs to a 4th quarter victory over Georgia Tech, Shockley entered the Georgia Dome the following week to give an MVP stomping of LSU and bringing a second SEC Championship to the Georgia in the Mark Richt era.After gambling his future by staying at Georgia, Shockley received the ultimate prize of a Championship to cap off his remarkable one year.
While the Bulldawgs and Shockley would face an embarrassing loss in the Sugar Bowl to West Virginia, Shockley put in an amazing performance that was the only reason Georgia remained in the game (minus Shockley, that game could have easily been 38-14).
In his one and only season, Shockley amassed 10 wins, an SEC Championship and MVP, the National Bobby Bowden Award, Johnny Unitas Golden Arm Award Finalist, and third in the AP's Player of the Year contest (only behind Bush and Young).
Despite his ability, poise, and leadership to bring another championship to the Red and Black faithful, it is the quiet loyalty he showed to Georgia that Bulldawg fans remember the most. 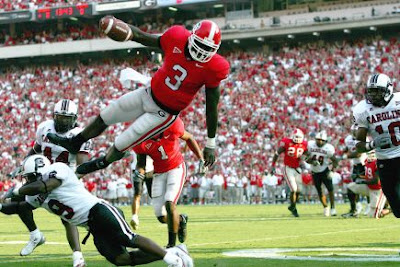 The greatest leap until we saw the likes of Knowshon
Posted by BulldawgJosh at 12:00 PM

A complete stud! Thank you DJ.

No doubt, One of the best Dawgs in my lifetime!

As good a player as he is/was he's 10x's a better person. Also he was one of the best team leaders we've had in a loooong time.

I love this video...Boise﻿ is back to losing some games after Kellen fails trying out in the NFL. Amanda Vanderpool