Our Turn to Spoil Their Season

Mark Richt has won two SEC Championships during his tenure at The University of Georgia. During both of those seasons, Georgia went into the game in Jacksonville with undefeated records only to fall short against the Gators.
In 2002, Georgia came to Florida sporting a #4 national ranking and an 8-0 record that included key victories over #22 Alabama and #10 Tennessee. Georgia was led by rising star David Pollack, who had made a name for himself with his amazing interception for a touchdown against South Carolina earlier in the year. Steve Spurrier had left Gainesville for the NFL, and the Dawgs were favored to defeat Florida for the first time under Mark Richt. A defensive struggle throughout the game, Florida took the lead in the 4th quarter on a touchdown pass from Rex Grossman. Georgia attempted to tie the score when David Greene found a wide open Terrance Edwards streaking down the field, but Edwards let the ball drop through his hands. Final Score, Florida 20, Georgia 13. 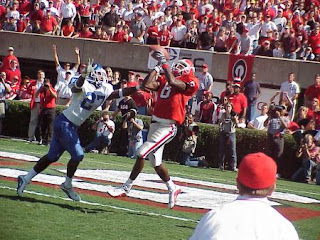 Unfortunately, more people remember Edwards for his drop than his brilliant career at Georgia

After stomping Boise State to open the 2005 season, Georgia was rolling along with 6 straight victories before hosting Arkansas for homecoming. But with the Dawgs out to an early lead, senior quarterback DJ Shockley was injured. The Dawgs held on to win 23-20, but knew they were facing a tough task in Jacksonville the following week.

Without Shockley, the Georgia offense failed to get going. They were able to hold the #18 Gators in check and finally found the endzone on a reverse pass to Shockley's replacement, Joe Tereshinski. 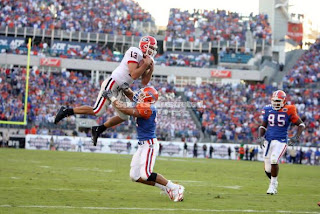 Georgia would lose its next game to Auburn the following week, but recovered to defeat LSU in Atlanta for the second SEC title of the Mark Richt era.

This year, the tables are turned as Florida comes in #1 in the country and a perfect 7-0 record. Despite three national championships in the last 15 years, Florida has never had an undefeated championship season. The Dawgs have a chance to play the spoiler, much like the Gators have in years past. It will take one hell of an effort, but in this series, the better team doesn't always come out the victor.

Labels: DJ Shockley, Hate Week, The Kind of History That Florida Doesn't Have

I remember the Edwards drop.

I felt bad for him too.

To beat them this yr, we'll need big games from DTs and the 2nd&3rd WRs. AJ will have a tough day if UF puts Haden and FS over top, which is what they should do. Hopefully someone else can step up.

Yep, 2002 hurt. Seems like all the other top 10 teams jockeying for position had either struggled or lost that day to boot. Sucked.