The Heavyweight Bout: Green vs. Berry

For those of you who read the Iliad in high school, you know that at one point they attempt to end the conflict by having a one on one fight between two men. Since it seems that both Tennessee (Eric Berry) and Georgia (AJ Green) heavily rely on 1 player to help them win games, why not let them decide this game like they did in the old days. Here's the tale of the tape:
In the White corner... 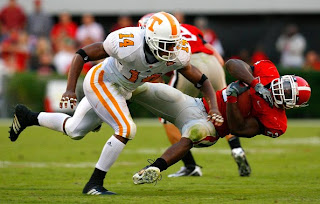 Eric Berry
Height: 5'11''
Weight: 203
Age: 20
Position: Safety
Hometown: Fairburn, Georgia
Awards: 2007 Freshman All-American, 2008 All-American, 2008 SEC Defensive Player of the Year
Impressive Statistics: Has recorded 13 interceptions in a little over two seasons including 3 that have been returned for touchdowns. Berry also played quarterback in high school with a 37-5 record as the starter.
Rival for title of best player in the country at their position: Taylor Mays, USC
Famous YouTube Video: "Eric Berry for Heisman"
And in the Red Corner... 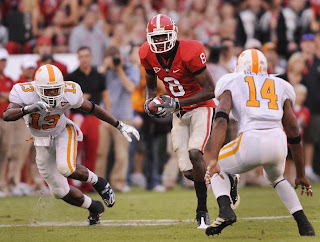 AJ Green
Height: 6'4''
Weight: 207
Age: 21
Position: Wide Receiver
Hometown: Summerville, South Carolina
Awards: 2007 Parade All-American, 2008 Freshman All-American, 2008 All-SEC, 2008 Freshman of the Year
Impressive Statistics: Through 18 games in his collegiate career, Green has amassed 86 catches for over 1500 yards and 13 touchdowns. He caught the game winning touchdowns in back to back games against Kentucky and Auburn in 2008. Green is 2nd all time in receiving yards by a high school athlete (5,373).
Rival for Best Player at their Position in the Country: Julio Jones, Alabama
Famous YouTube video: "The Catch"
I imagine the fight would look something like this:

It should be a fun battle to watch in Knoxville this Saturday.
GO DAWGS!!!
Posted by Streit at 10:24 PM

Despite the Kiffin's rhetoric, they will not play AJ man up. Never the less, he will beat them! He is a football god! Berry is merely great.

Nice take and a very strong and entertaining delivery. This really should be fun.

OMG...sometimes I can't believe the things that end up on this blog.

Thanks for sharing such nice article here but I do not know much about this game. Well it is nice to post here as it is my first post. I like this site.