The last time UGA met Tennessee when both teams were unranked. Like this Saturday, the game was played in Knoxville.

Tennessee won 32-0. I pray for the mental health of the Bulldawg Nation that doesn't happen this Saturday.

The Dawgs and Vols have met 25 times since that 1937 meeting. An impressive streak of at least one program being ranked between the two. Something you might expect when discussing the program with second most SEC titles (Tennessee - 13) against the program with the third most SEC titles (Georgia - 12). These are the kind of historical streaks that Florida doesn't have. Both UT and UGA have actually played football for 100+ years at a quality level. 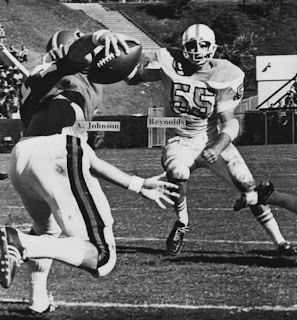 From 1972: UGA QB and Athens High School's very own Andy Johnson squares off against UT LB Art Reynolds at Sanford Stadium. #13 UT would win 14-0. Yet another UGA-UT matchup in which at least one team was ranked. Courtesy of UPI and govolsxtra.com.

Coach Joel Hunt would lead the Dawgs for one season in 1938 before Coach Wally Butts took over in 1939 and would be the head man for 21 seasons.

Neyland left after 1940 as he was recalled to military service during World War II. He returned to coach the Vols from 1946 to 1952.

Labels: 1937, Georgia Football History, Tennessee, The Kind of History That Florida Doesn't Have