Because there is always something to complain about:
GREAT MOMENTS IN DEAD SILENCE
If you happened to not catch the UGA-Cocks game on television, then you missed out on a bloody assault that could only remotely be considered legitimate broadcasting. Things got started off right with absolute silence coming from Bob Davie and Mark Jones during kickoff, with a total of 60+ seconds of silence. This amount of broadcasting silence occurred at least one additional time in the broadcast.
Was this unprofessional? Potentially. Was it a technical glitch? Possible, except it occurred too many times in the game.
Was it actually a relief to just hear the sounds of the game, rather than a couple imbeciles talk about everything but what's actually happening on the field? MY GOD YOU HAVE NO IDEA HOW EJACULATORY AMAZING IT WAS!
I CAN HAS CRAIG AND MIKE SAMMICH!?!
If you know me (which you probably don't), you know that I am no fan of Craig James.
This season, ESPN has decided to torture us by combining the raw and awesome powers of MIKE "Britney Spears" PATRICK and CRAIG JAMES into what has to be the most vicious mindfuck anyone could conjure up to torture college football fans. 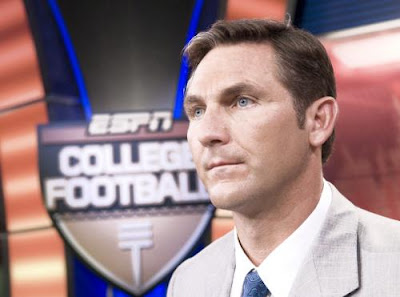 They say evil doesn't have a face. They're sooooo wrong.
Hey, you know that Ron Franklin guy? Let's make sure he's on the 10:00a.m. coverage of the All Male Private College Your Grand-Dad Went To vs. The Program That Will Hopefully Still Exist By December.
You thought Thursday night with Jesse Palmer and ol' Craig were bad? Nope, you were wrong about that.
Someone at ESPN is just messing with all of us now, and to them, I'd have to say...touche. You have really upped the ante this time.
TALES OF DEFEAT
Michigan loses to Appy State? That's nothin'! Oklahoma gets beat by Boise and their 1937 Statute of Liberty Play? Such a defeat is for amateurs who know nothing about degrading losses.
To be a real professional in the art of public embarrassment, you have to lose to the smurf turf and a I-AA school in the same season, and you get the MVP if you do it in BACK TO BACK weeks!
Enter Virgina Tech, who recently handed over their man card after being shamed by James Madison University, a former I-AA champion.
Thank the Lawd! for that weak ass ACC, because the Hokey Pokey Dancers are looking at an 0-12 season and the kind of shame that never, ever goes away. Doesn't matter how hard you scrub, it ain't goin' nowhere!
THE APOCALYPSE IS UPON US, THE DAKOTAS ARE TAKING OVER
Last Week, North Dakota State (I-AA) defeats Kansas. This week, South Dakota defeats Minnesota. It was only in 2007 that Minnesota lost to North Dakota State. So for Minnesota, this is their second DAKOTA FAIL.
The Dakotas are on the rise and aren't taking your shit anymore, Big 12(?) and 11. They've beaten both of you and are setting their eyes on a 2 for 1 punch.
Mark your calendars now, on September 25 South Dakota State visits Nebraska for what can only be the Jackrabbits rise to the top of the Dakota hierarchy.
These things come in threes, so you better watch out Bo. 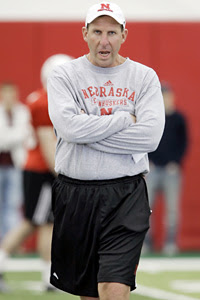 You're about to get invaded from the north, by South Dakota State. That's directionally confusing.
Posted by BulldawgJosh at 3:55 PM

Seriously, those things are huge in South Dakota.