Alabama @ Duke
Line: Alabama -24
The defending champs in football. The defending champs in basketball. Unfortunately for the boys from Durham, they’re playin’ with the pigskin on Saturday. And Duke thought it was tough playing Butler in its basketball-crazy hometown of Indy. Coach K, this is what a real rockstar head coach looks like. Roll Tide 41-10.

Clemson @ Auburn
Line: Auburn -7.5
In the words of Lewis Grizzard, Clemson is just Auburn with a lake, and they’ll be seeking some extra hydration as the Plainsmen spread ‘em out and run ‘em. Cam Newton looks for real and Howard’s Rock is coached by a man named Dabo. But baseball great Kyle Parker (why would you ever return to Clemson?) will keep the ACC Tigers close as Auburn wears out its own defense again by either scoring quickly or going three-and-out. Tigers/Plainsmen/War Eagles don’t cover, but push the SEC’s record to 2-0 against the ACC this week. Identity Crisis 30-24.

Miss. State @ LSU
Line: LSU -8
The Bayou Bengals turned away the Western Bulldogs at the goal line last year to avoid cowbells ringing in their ears for 365 days. Jefferson and Lee continue to battle it out for most ineptness as LSU’s quarterback. State is better coached, but LSU is more talented and at home. Mike the Tiger 24-17.

Vanderbilt @ Ole Miss
Line: Ole Miss -12
Ole Miss seeks to run its record to 2-1 in games it’s favored by double digits in. Good luck to Georgia State versus Jacksonville State this week, they’ll need it. But back to the SEC as Robbie Caldwell looks to out motivate Houston Nutt in the respective pre-game locker room speeches. Ultimately though, Ole Miss is in the people-helping bidness, and it’ll pay off as Masoli leads the fightin’ Ackbars to their first home victory. Play Dixie in the Grove Again 23-10.

Florida @ Tennessee
Line: Florida -14
Remember when Tennessee actually kept this game somewhat close? Urban still hasn’t lost to the Vols and he isn’t about to this year. Of course, if Smoky was good this year, speedy Chris Rainey wouldn’t be missing from the team this weekend. It’s not good to be Chris Rainey anymore. But even speedier Jeff Demps will be there flying down the sideline when the Gators need him to be. Florida rights its offense. Blue, Orange 37-14. 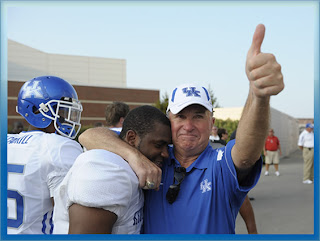 Furman @ South Carolina
Line: Furman’s a I-AA School
Damn you, Marcus Lattimore. The Cocks move to 3-0, and buy up tickets to the Georgia Dome for early December that they’ll have to sell in early November.
Posted by Earl at 7:00 AM