A Bulldawg Legend Passes On

You may not have known it, but a Bulldawg legend passed away on Friday night, August 28.

How exactly is he a legend? Among all those that call themselves Dawgs, there are a group of legends that have shown constant dedication to everything that defines being a Dawg. There are thousands of these legends currently in the Bulldawg Nation, and even more whose spirits are felt every time we walk across North Campus, every time we see a “G,” and every time we enter Sanford Stadium on a Saturday afternoon.

William David Gibbs is one of these legends. 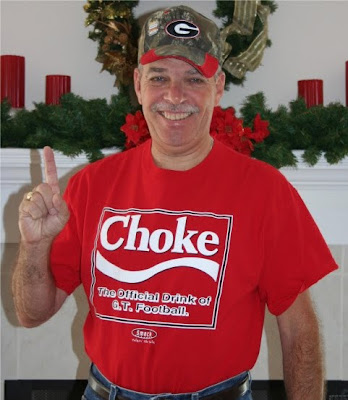 Mr. Gibbs was a devoted Dawg throughout his life, with only his family and serving the Navy ranking ahead. He often expressed how he knew the Navy was superior to anything else, and how being a Dawg was a blessing from above.

Mr. Gibbs is also the father of one of the best friends I’ve ever had, Alex Gibbs. Alex is also a strong supporter, frequent reader, and commenter on this blog.

The stories his dad, Mr. Gibbs, recounted of the many cocktail parties in Jacksonville, and every major event that took place in Athens during the 1980s, mimicked a documentary film rolling through your head while listening to him.

Red and Black ran through the veins of Mr. Gibbs and he made UGA a part of his family. He named his daughter Georgia and his son David Alexander William Gibbs (with the agreement of Mrs. Gibbs, of course), forever tying his family to the University of Georgia.

In his last week, Mr. Gibbs even got a phone call from Coach Vince Dooley to talk about the upcoming season. They both agreed that it was going to be a great one.

I would be remissed if I did not mention the jovial nature of Mr. Gibbs. No one on this Earth had more of a sense of humor, a positive outlook on life, and a determination to live the life to the fullest. He was always prepared to have a great time, and no matter how obvious and comical of a situation you found yourself in, he would always ask, "What ya'll doin?!"

A former co-worker of Mr. Gibb’s said in his remembrance: “I know David will keep the ice chest cold and full, awaiting each of us to join him one day.”

Mr. Gibbs did more than just define what it meant to be a Dawg, he exemplified how being a Dawg can be a way of living your life. It is a way of life that creates and fosters families and builds bonds of friendships among strangers.

More importantly, Mr. Gibbs lived his life full of passion, loyalty, and honor. He demonstrated these qualities in his defense of our country, his love for his family, and his affection for everything red and black.

On Monday afternoon, a large black “G” stood next to the flag draped casket of Mr. Gibbs. After the preachers had spoken the Gospel, and his fellow sailors had bid adieu, “Glory, Glory” chimed from the organ and rang through the church as the pall bearers came to carry Mr. Gibbs away.

David Gibbs will be there in Sanford Stadium with you, with me, and with all of us in Athens on each Saturday. Along with the thousands of other legends that have dedicated themselves to this family and institution, he will forever stand between the hedges. 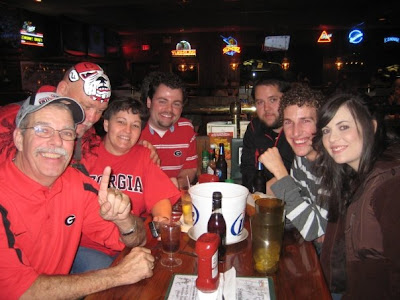 Earl and I with the Gibbs family and Mike Woods in Orlando on New Years Eve before the Capital One Bowl.

For more on the life and remembrance of David Gibbs, you can visit the following website:

Posted by BulldawgJosh at 8:45 AM

That is perfect. Dad would be proud!

Our thoughts are with you and your family, Alex.

Damn Good Dawg. So glad I had the pleasure to meet him in Orlando.

Will never forget him making fun of that large plate of nachos I had ordered.

Our thoughts and prayers are with your family, Alex.

A great post. Well written. I did not know Mr. Gibbs, but your portrayal makes me wish I had.I can only add: "Godspeed, Mr. Gibbs". "Once a Dawg, Always a Dawg!". Thanks.

Wow! Inspirational. Hope he sits a spell beside me in Sanford this fall.

You know you are a good writer when you can give someone chills about the passing of a person they have never met. Great job. I have no doubt Mr. Gibbs was a diehard and will be missed. Glory, Glory may be my version of TAPS when I cash 'em in. How thoughtful. Go Dawgs!

A beautiful post for someone who must have been a true fan. My thoughts go out to you, your friend Alex, and his family.

My thoughts are with the Gibbs family. I did not know Mr. Gibbs, but this post brought tears to my eyes this game day eve morning. Go Dawgs.