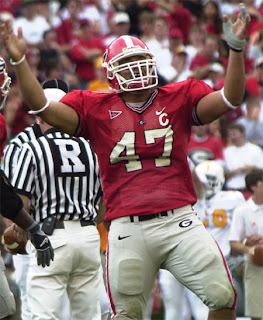 In 2001, a two-star fullback from Snellville followed his good friend David Greene to Georgia to play for new coach Mark Richt. During summer practice, David Pollack was in contention for the starting fullback spot when injuries depleted the depth chart along the defensive line. At the request of Coach Richt, he switched sides of the ball and began making an immediate impact. In 2001, Pollack played primarily defensive tackle under coordinator Brian Van Gorder. He made 5 starts and earned a spot on the All-SEC Freshman team, but few expected the amazing season Pollack would have the next fall.

2002 was a magical year for the Georgia Bulldogs and David Pollack was leader of one of the best defenses in the nation. Few people across the country knew who Pollack was, until Georgia traveled to South Carolina to take on the Gamecocks. With Georgia struggling on offense, Pollack took things into his own hands (literally) and put the Dawgs on the score board:

From that point on, everyone knew about Pollack. The only problem was that no one could stop him. Georgia won its first SEC Championship in 20 years and Pollack was named the SEC Player of the Year (the first defensive player to win the award since 1988). He recorded a Georgia record 14 sacks and led the SEC in tackles for a loss with 23. He was also first team All-SEC and named an All-American.

While he may have been an obscure sophomore in 2002, every team knew who Pollack was by 2003. Despite facing constant double teams, Pollack had another great season on his way to a second straight All-American honor. He had 92 tackles, 7.5 sacks, 13.5 tackles for a loss, 2 interceptions, and 32 quarterback pressures. He was once again first team All-SEC and won the Tom Hendricks Award, given annually to the nation’s top defensive end. After deciding to return for his senior season, Pollack capped his career with a banner year in ’04. He had 52 tackles, 12.5 sacks, 17.5 tackles for a loss, and 41 quarterback pressures. In his final game (the Outback Bowl) against Wisconsin, Pollack made a play similar to the one that put him on the national map. With Georgia holding a lead in the fourth quarter, he forced and recovered a fumble in midair to help seal the Georgia victory. He become only the second Georgia player to be named a three-time All American and was awarded the Lombardi Award (nation’s top lineman), Hendricks trophy, and the Bednarik Trophy (nation’s best defensive player).


David Pollack will forever be remembered for his effort and performance on the field. His motor never quit moving and he could always be seen doing jumping jacks to try and fire up the Georgia faithful. He is Georgia’s all-time leader in sacks with 36 (the third highest total in NCAA history) and tackles for a loss with 58. He also had 283 tackles and 4 interceptions in 50 games (44 as a starter). He was drafted in the first round of the 2005 NFL Draft by the Cincinnati Bengals. After a promising rookie season, Pollack’s football career was ended in early 2006. He suffered a broken neck in a game against the Browns and was unable to return to the playing field. After retiring from football, he found a home as a radio personality in Atlanta, teaming with Mike Bell on 790 the Zone. He can also be seen this fall calling college football games for ESPN.
Posted by Streit at 7:00 AM

imagine if a CBS reporter mispronounced "Pollack" if he was on Urban Cryer's team.

Would he simply kill the reporter or would his head explode?

Great play, David. Is it just me or did the commentator call him "Pollock" and then Richt corrected her?﻿Amanda Vanderpool