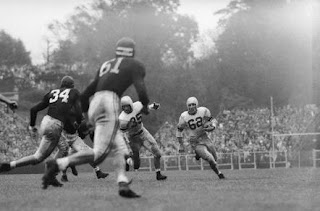 3: Charley Trippi, Halfback #62 (1941 – 1943, 1945 – 1946)
Paul “Bear” Bryant once called him the greatest college football player who ever lived and in 2009, ESPN named him the twentieth greatest college football player of all-time. Charles “Charley” Trippi came to Georgia in 1941 after choosing to attend LaSalle Military Academy for his first year after high school. He had originally committed to attend Georgia following high school, but his successful season at La Salle resulted multiple scholarship offers, including powerhouse Notre Dame. But Charley kept his word to Harold Ketron and enrolled in Georgia in 1941. After leading the freshman team to an undefeated season, he was ready to join a Georgia backfield that already included All-American Frank Sinkwich in 1942.
Trippi played behind Frank Sinkwich during the first half of the ’42 season, but Coach Wally Butts decided to move Sinkwich to fullback. Trippi took over as the starting tailback and the Georgia offense began running wild on other teams in the SEC. Here is what Trippi thought about the Georgia offense in ’42:
''We really had an awesome offense (after the switch),'' Trippi said. ''Frank's quickness off the ball was so devastating that you could not imagine a more effective inside runner. And his running opened up the outside lanes for me.''
Sinkwich would go on to win the Heisman trophy and Georgia finished the season 11-1 and earn a trip to the Rose Bowl. Trippi had 1,239 yards of total offense (672 yards rushing and 567 yards passing) despite only starting for half the year. Georgia defeated UCLA in the Rose Bowl and Trippi was named the game MVP after gaining 130 yards on the ground. It would be the last game Trippi played at Georgia for over two years.
Trippi served in the Air Force during World War II and finally returned to Georgia for the second half of the 1945 season. Trippi took a few games to get acclimated to Coach Butts’ new t-formation offense but finally found his stroke in the regular season finale against Georgia Tech. He set an SEC record with 323 passing yards and rushed for 61 yards, totaling 384 yards of offense in the game(also an SEC record at the time). He threw a 47 yard touchdown pass and returned a punt for a touchdown to cap his junior season in the 20-6 victory over Tulsa in the Oil Bowl. During Trippi’s senior season in 1946, Georgia would go undefeated winning the SEC Championship (they were also recognized as national champions in one poll). Trippi was the team captain and often played the entire game on both offense and defense. In the Sugar Bowl victory over North Carolina, he played all 60 minutes and threw a 67 yard touchdown pass to Dan Edwards. While he did not win the Heisman, he was a consensus All-American and won the Maxwell Award, which is given annually to the best collegeiate football player in the United States. For the season, he rushed for 744 yards, had 662 yards passing, and accounted for 14 touchdowns.
Charley Trippi was the first overall pick by the Chicago Cardinals in the 1945 NFL (before he returned to Georgia for his senior season). He played a key role in the Cardinals’ 1947 NFL Championship, totaling 206 yards in the victory over the Philadelphia Eagles. He is a member of the Georgia Circle of Honor, the College Football Hall of Fame, the Georgia Sports Hall of Fame, and is one of only four Bulldogs to have his number (62) retired. He was also elected to the Pro Football Hall of Fame and is the only member with over 1,000 yards passing, rushing, and receiving in his career.
Posted by Streit at 7:00 AM

I have always been curious as to why Trippi was considered better than Sinkwich when Sinkwich won the Heisman? Especially since they played on the same team for part of their careers at UGA. Even ESPN ranked Trippi ahead of Sinkwich in there list of all time greats in college football.

Anyone have any thoughts on that?

One of the﻿ best to play the game! Amanda Vanderpool