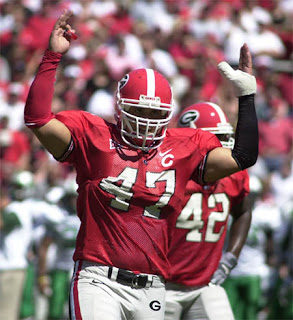 Number of sacks by David Pollack during the 2002 season in which he was named SEC Player of the Year. Pollack would become a first round draft choice by the Cincinnati Bengals in the 2005 NFL Draft but his career was ended after he suffered a broken neck during a preseason game in 2006. Pollack can now be heard as a co-host on the afternoon radio show on Atlanta sports talk radio station 790 the Zone.
Posted by Streit at 9:15 AM

What else can you say about this young man that hasnt been said. NO ONE knew how to GATA like DP. He did what was asked and he always did it gladly.

Look at the 4th and inches late in the 4th quarter to seal the season opener against Clemson..Thats #47 playing fullback.

The only 3 time all american besides Herschel. Not Sinkwich, Trippi, Ward, Greene, Hoage, Tarkenton or anyone else can claim that. WOW..a DGD for sure.

Cant wait for the season.

Two weeks! Interested to hear if the pre-game on the Georgia Bulldogs radio network will really be much different.

Oh yeah, then there's a football game too...