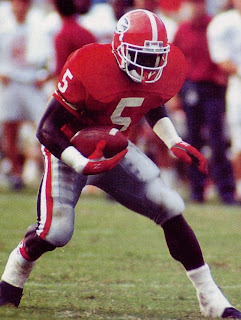 Rushing touchdowns scored by running back Garrison Hearst in 1992, and SEC record. Hearst finished third in the Heisman voting that year and went on to a successful NFL career with the Arizona Cardinals and San Francisco 49ers. The video below is a 96 yard touchdown run by Hearst against the New York Jets. This run came in overtime and gave the 49ers a 36-30 victory.

Labels: Dawgs in the NFL, Garrison Hearst, The Countdown 2009

Who was the guy he stiff-armed?