How I Spent My New Year's Eve

(Please Note: This is a personal account of the events that took place on my trip to Orlando and they are somewhat off topic for this blog, but I thought it appropriate to share my story.)
As I stated earlier this week, Mrs. Streit and I set out for Orlando from Atlanta at around 8:00 on Wednesday. We had dinner reservations in Orlando that night and tickets in section 212 to see the Dawgs take on Michigan State in the Capital One Bowl the next day. The trip was going fine and we preparing to stop in Valdosta for lunch when our world (figuratively and literally) got turned upside down.
We had just passed the highway sign for Hahira and I was telling Mrs. Streit that it was the home of former Braves outfielder JD Drew. We were in the middle lane (of 3 on I-75 South) when a white semi truck suddenly began coming into our lane. To avoid the truck, I hit the brakes and turned the wheel. We began to skid and I was unable to regain control.
You know how in movies they always show wrecks in super slow motion? Well that is exactly how the next few seconds felt. We crashed into the concrete median and proceeded to flip twice back into the middle of I-75. We landed right side up and once I realized both myself and Mrs. Streit were okay, I got out and looked at the car. This what I saw: 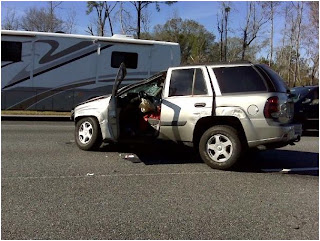 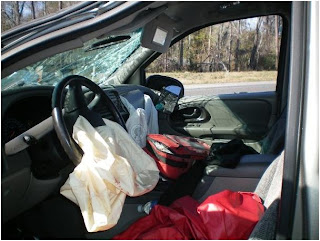 And of course, the semi was gone. A number of people stopped to help as we waited for the police and ambulance to arrive. Miraculously, we both came out nearly unscathed. Mrs. Streit had a cut on her hand and some bruises and I suffered a pretty deep cut just below my elbow. As we were 4 hours from home and our car was un-driveable, we both rode to the hospital in the ambulance. We spent the next 6 hours at South Georgia Medical Center until finally my arm was cleaned and stitched up (it took them about 5 hours to finally work on me as my arm continued to bleed.) 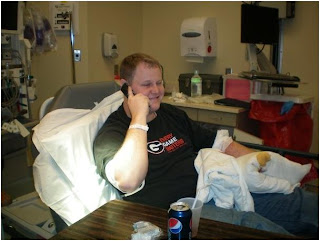 Here I am at the hospital, waiting to be stitched up.

In the end we never made it to cheer on the Dawgs. I watched Stafford lead us back in the second half from my couch doped up on codeine. I am thankful to be alive and am a firm believer in the statement, "Seat belts save lives." Also surviving the crash was the bottle of champagne from my wedding night. Mrs. Streit and I had planned to share it on our first New Year's together and despite being thrown onto the side I-75, it survived. 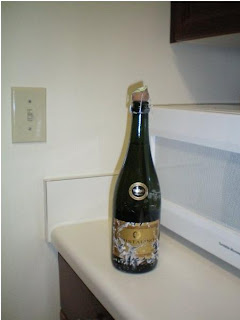 With the Georgia victory, 2009 is off to a better start than 2008 ended. Make every moment this year count, because you never know when it could be your last.

Glad to hear that youre okay, we don't need to lose any real Dawg fans....Goooo Dawgs!

Oh dear God! So thankful you're both okay and so very sorry you had to endure all of that on your vacation.

The part about the wedding champagne sent chills up my arms! Happy it survived unscathed as well. This New Year's you had something else wonderful to truly celebrate together - being alive & getting through it together.

Praying you both heal up well soon & many blessings for a bright and happy future together!

Glad to know ya'll were alright, I think the champagne making it through the wreck is a good Omen. Did they catch the Teamster who nearly killed you?

They did not. It was good that there were not a lot of other cars around because we did not hit anyone, but it was bad because no one else was close enough to ID the truck.

Glad that you and Mrs. Streit are okay. You gave me a real scare when I talked to her right after the accident.
I know you were bummed to have missed the game.

Dang dude! This is a testament to why I try to avoid I-75 at all cost; nothing but sleepy ass truck drivers and speeders trying to kill you.

Glad you made it our alright. At least you got a wicked scar to tell your kids about. "One time kids, I flipped my truck 17 times OVER a semi and landed on all four tires!"