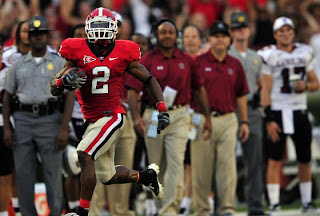 When Brandon Boykin decided to return to Georgia for his senior season, Georgia not only got its best defensive back to return but also one of its most important weapons in controlling field position. Ask Tennessee, South Carolina, Kentucky, or Texas A&M who Georgia’s most explosive player is and I am sure they will at least mention Boykin. This fall, Boykin has the chance to become the most prolific kickoff returner in SEC history despite only starting at that position for three years (including this fall). Here is why.

Start with Boykin’s career totals. He has returned 72 kicks for 1,810 yards (25.14 avg.) with 4 kickoff return touchdowns. That includes an NCAA record 3 of 100 yards. If Boykin’s 2011 season is on par with previous, he could break every major performance record for an SEC kickoff returner:

Chances of Breaking: 35% - He would have to record 41 kickoff returns this fall, meaning the Georgia defense would have to give up a lot of scores. Since his previous career high was 38, I don’t see this one happening.

Chances of Breaking: 75% - Boykin has already had a season in which he eclipsed this amount. If he is the primary returning for the Dawgs this fall, he should be able to reach the mark.

Chance of Breaking: 15% - He would need an amazing average to bring his career average up three yards.

Chance of Breaking: 50% - Yes, he has already tied the record and is one away from tying the NCAA record of 5. But returning a kick for a touchdown is a difficult task. After scoring three in 2009, Boykin only scored 1 in 2010.

With all due respect to Brandon, here's hoping he doesn't get enough kickoff return opportunities to break a bunch of records!

Thanks, ive been looking﻿ for this game.. Amanda Vanderpool