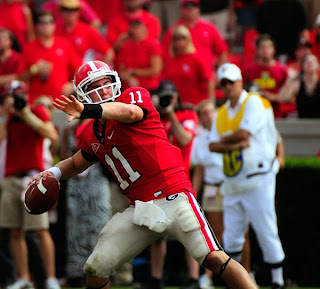 Heading into the 2010 season, the quarterback position was one in question for the Georgia Bulldogs. Aaron Murray had won the job, beating out Logan Gray following the dismissal of Zach Mettenberger. With his play last fall, Murray proved that the job should have been his all along. Named as a freshman All-American by a number of publications, Murray had the finest first season at quarterback in Georgia history. As a matter of fact, if he had not struggled in the bowl game, he may have broken the single season records for both touchdowns and passer rating. For the year, he completed 209 of 342 passes for 3,049 yards and 24 touchdowns. He had only 8 interceptions and also rushed 87 times for 167 yards and 4 scores. So what can we expect from Murray in 2011?

First and foremost, expect Murray to continue to display smart decision making in the pocket. With the exception of one bad game against Florida, Murray averaged less than a half of a turnover per game. Very impressive for a freshman. I would also expect Murray to run a little bit less than he did last season. While his legs are a great weapon, he will now be counted on to lead the offense and I see him more willing to throw the ball away than try to dance for a three yard carry.

Overall production wise, Murray’s completion percentage and touchdown to interception ratio should remain unchanged. I expect less pass attempts this fall, especially if Isaiah Crowell can be the back everyone expects.