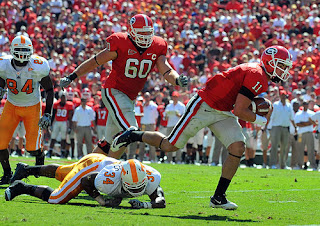 Mark Richt’s first game against Tennessee remains one of the greatest victories in Georgia history. When Tennessee took the lead on a screen pass late in the 4th, all hope looked lost for Georgia. But freshman quarterback David Greene led the Dawgs quickly down the field and found Verron Haynes for the game winning touchdown:

Georgia and Tennessee’s 2010 seasons were very similar in the results on the field. Both teams finished with 6-7 records after failing to win their bowl games at the end of the season. Freshman quarterbacks Aaron Murray and Tyler Bray appear to be budding superstars in the SEC. This year’s contest will be critical for the Bulldogs if they hope to remain competitive in the SEC East. Georgia crushed the Vols at home in 2010, payback for the beat down the Dawgs got in Knoxville in 2009. Since 2005, the closest game between these two has been 12 points.