The Best Kicking Duo in America

One thing that remained constant in the ten years Mark Richt has been coach in Athens in solid performances in the kicking game. Even the worst kicker of the Richt era, Andy Bailey, was on the All-SEC Freshman team before losing his job to Brandon Coutu. This fall will be the senior season for two of the finest kickers in Georgia history, Blair Walsh. 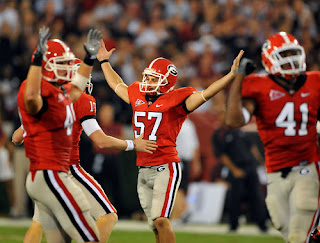 Many people questioned the decision to offer Blair Walsh a scholarship when he came to Georgia. Georgia’s two All-SEC performers at kicker during Richt’s tenure were both walk-ons and the previous scholarship kicker (Andy Bailey) lost his job after one season. But Walsh quickly proved he was worth the scholarship, earning Freshman All-SEC marks in 2008. In 2009, he was a finalist for the Lou Groza Award, given to the best kicker in the country. And in 2010, he was named first team All-SEC, making 20 of 23 field goals and leading the SEC in touchbacks. 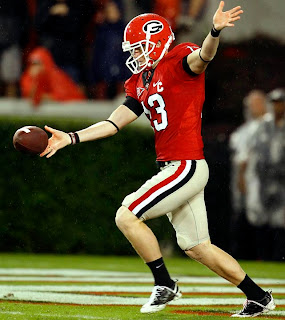 Like Walsh, there were questions about whether a punter deserved a scholarship offer even if he was the son of a Georgia legend. Butler became the starting punter in 2009 and had a banner year. He earned First Team All-American honors, lead the country in punting by over two yards, and won the Ray Guy award. In 2010, he was once again a finalist for the award. He is the most successful punter in Georgia history.