Tales of a Bulldawg in Columbia

As I hinted at in an earlier post, I am enrolling this fall in South Carolina’s School of Law. While I was running around Columbia this week on errands, I went into Publix for groceries, wearing a Butler Bulldogs t-shirt.
Now before I get to the punchline, I actually have a direct connection to Butler, having lived outside of Indianapolis for 7 years while also living 2 doors down from the future head coach of the Butler Bulldogs, Brad Stevens. Plus there’s the whole Hoosiers appeal too. 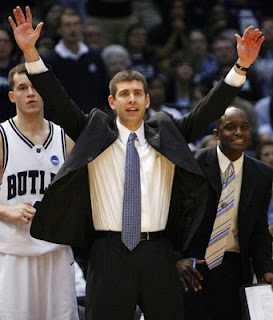 Anyways, as I was walking near the produce, a 60-ish Publix employee stocking the shelves stopped and asked me, “Who is Butler?” After explaining that Butler actually went to the NCAA basketball championship game in March before losing, he replied with a big smirk, “Well, South Carolina beat y’all”. It took a second of confusion for me to realize he was hanging his hat on the Diamond ‘Cocks baseball championship and just wanted to make sure I knew about it, sport be damned. I did correct him on his sport confusion, but did not inform him of my UGA connections, as it would have required 10 more minutes and some verbal football sparring over South Carolina’s history of gridiron mediocrity.


By the way, I’m really looking forward to wearing my Larry Munson t-shirt to campus when classes start.


Hopefully I will be able to provide a little blogosphere color during the run up to the September 11th UGA-SC game and beyond, from the wilderness of Columbia.
Posted by Gov Milledge at 6:18 AM

Bless you, my son. If it makes you feel any better, I still get Illinois people gigging me about the 2003 NCAA Men's Tennis Championship they won in Athens. Of course, I simply remind them of last December in Gwinnett with basketball....

"60-ish Publix employee stocking shelves"? What position did he play on SC's football team? Kiffin was wrong again! They all don't end up pumping gas.

MT, I'm a 2L this year at South Carolina and your fellow bulldog. Shoot me an email and let me know what group you're in and what professors you have. story.stephen@gmail.com

The ball left his hands well﻿ before the buzzer, there are different angles than this one that clearly show it. Good attempt by Hayward.amanda vanderpool fashion