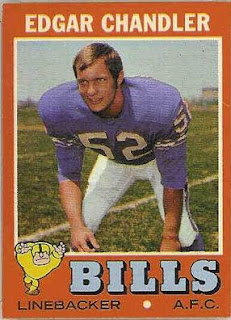 Not many players posses both the physical size and speed to play both linebacker and offensive tackle, but Edgar Chandler was no ordinary player. A three star athlete in high school, Chandler came to Athens from Cedartown, Georgia. His high school coach, Doc Ayers, joined Vince Dooley’s staff at Georgia and Chandler followed.
Chandler would become a three year starter for Dooley as Georgia would compile a 23-9 record during those seasons. He played mostly right tackle and was named to the All-SEC first team in 1966 and 1967. He was named an All-American by the NEA in 1966 and as Georgia finished with a 10-1 record, an SEC Championship, and a Cotton Bowl victory. In his senior year in 1967, Chandler was a unanimous first team All-American. He was invited to three senior all-star games (Liberty Bowl, North South Bowl, and the Hula Bowl.
Chandler is still considered one of the finest offensive linemen in SEC history. He would go on to a career in the NFL with the Buffalo Bills. To better utilize his talents, Chandler switched to linebacker. He was inducted into the Georgia Sports Hall of Fame in 1988. He also made a funny appearance as an audience member on the Tonight Show on an evening when Don Rickels filled in for Johnny Carson. Check out Chandler in the clip below at the 8:20 mark:
Posted by Streit at 2:54 PM